1,2
China expects new round of dialogue with US--China Economic Net 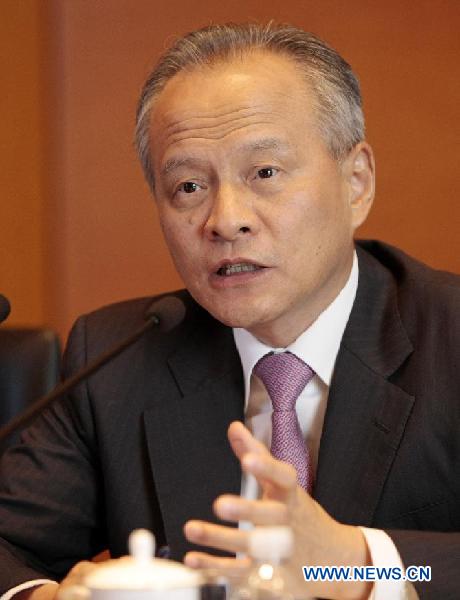 Chinese Ambassador to the United States Cui Tiankai speaks during a joint interview with the Washington-based Chinese media in Washington July 7, 2013. The upcoming 5th China-U.S. Strategic and Economic Dialog is believed to produce positive results under the guidance of the important consensus on building a new type of major-country relationship reached at last month's historic summit, Cui Tiankai said on Sunday. (Xinhua/Fang Zhe)

Specifically, the two sides will explore ways featuring positive interaction and cooperation in the Asia Pacific region, and discuss how to jointly deal with new uncertainties faced by both economies and dismantle trade barriers such as the unjustified restrictions on Chinese investments, the ambassador said.

On cyber security, which recently attracts more attention than any other topics, Cui rejected the U.S. accusation of so-called China's hacking of U.S. computer networks, saying Washington has failed to present hard evidence to prove it.

The revelations by Edward Snowden, a former contractor of the U. S. spying agency the National Security Agency, about the massive cyber surveillance and spying operations carried out by the United States on other countries including China have demonstrated that cyber security is not a single issue between China and the U.S., but a global problem faced by most countries, he said.

Cui added that the cyber working group will convene for the first time during this round of dialogue, in an attempt to establish rules regarding cyberspace. He proposed to create "a common set of rules in cyber space through a multinational institution such as the United Nations."

The Chinese envoy also expressed the hope that this round of S& ED will bear fruits through creative thinking and concrete actions to enhance mutual trust, deepen cooperation and properly deal with differences, so to ensure the healthy, steady and sustained development of the Sino-U.S. ties.