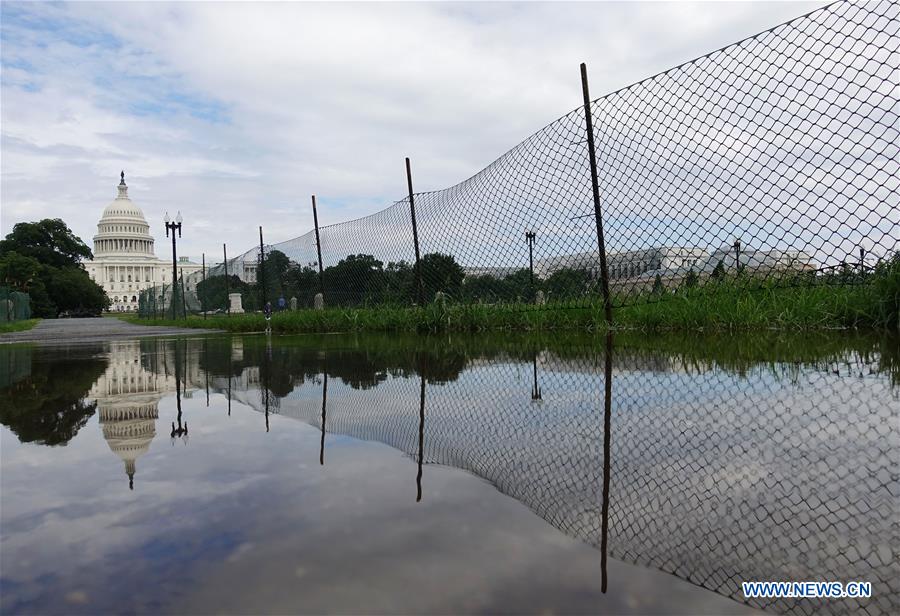 People fled to the roofs of their cars, Virginia Square metro station got a waterfall situation, the U.S. National Archives was shut down, and the White House basement was soaked.

National Weather Service meteorologist Cody Ledbetter said the storm dumped about 6.3 inches (about 17 cm) of rain near Frederick, Maryland, about 4.5 inches near Arlington, Virginia, and about 3.4 inches at Ronald Reagan Washington National Airport in a two-hour period. The service declared a flash flood emergency across the area.

In Washington D.C., water gushed into the press workspace in the basement near the White House's West Wing, and staff worked to drain puddles of standing water with wet vacs.

Many streets and sidewalks flooded and pedestrians had to leap over flows of water at curbs in the U.S. capital. The D.C. authorities said they responded to more than a dozen calls about motorists stranded in high-water areas across the city.

No injuries were reported in the capital city, and no one was taken to a hospital, according to Vito Maggiolo, a spokesman for D.C. Fire.

In Potomac, Maryland, the water tore a large gap in Belfast Road, local media reported. People fled to the roofs of their cars as water quickly engulfed roadways.

Pete Piringer, a spokesman for the fire department in Montgomery County, Maryland, said emergency workers responded to dozens of rescue calls and used boats to pluck people from flooded cars.

"Everywhere I turned, there was traffic and roads closed," he said.

By early afternoon, thousands of area residents remained without power, according to a Washington Post report.

Utility officials said crews had restored power to thousands of homes, but by 1:00 p.m., 1,300 Pepco customers and 2,000 Dominion customers were without power, down from at least 10,000 in the region since the storms started early Monday, said the report.

Dominion spokesman Jeremy Slayton said that at the hardest-hit areas in northern Virginia, the utility is having problems with downed trees on power lines and flooding. At its peak, 7,000 Dominion customers were without power.

Due to lower speed restrictions in place after the rains, riders heading into the evening commute would continue to see residual delays, Metro said.

"We expect that all VRE trains will experience delays this afternoon," spokesperson Karen Finucan Clarkson told local media. "It does not appear as though there will have to be any single-tracking." CSX and Amtrak have also put high-water speed restrictions in place.

Police also warned drivers to be cautious even after the water recedes as there may be debris left behind on the roads.

It often rains heavily in the Washington D.C. metro area in sultry summer but not often goes on for more than an hour like what happened on Monday.