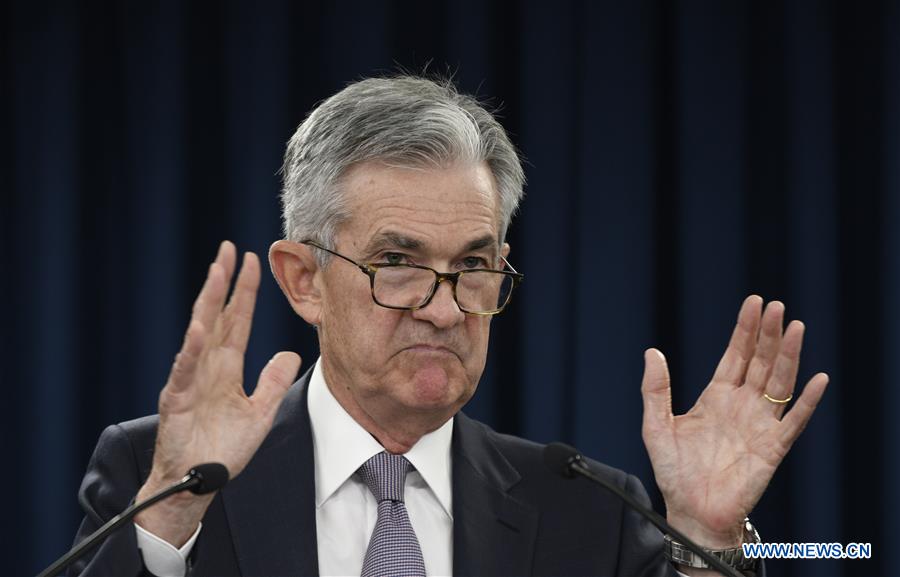 U.S. Federal Reserve Chairman Jerome Powell speaks during a press conference in Washington D.C., the United States, on Sept. 18, 2019. U.S. Federal Reserve on Wednesday lowered interest rates by 25 basis points amid growing risks and uncertainties stemming from trade tensions and a global economic slowdown, following a rate cut in July that was its first in more a decade. (Xinhua/Liu Jie)

U.S. Federal Reserve on Wednesday lowered interest rates by 25 basis points amid growing risks and uncertainties stemming from trade tensions and a global economic slowdown, following a rate cut in July that was its first in more than a decade.

The Federal Open Market Committee (FOMC), the Fed's rate-setting body, trimmed the target for the federal funds rate by 25 basis points to a range of 1.75 percent to 2 percent after concluding its two-day policy meeting, largely in line with market expectation.

Despite strong labor market and robust growth in household spending, "business fixed investment and exports have weakened," the FOMC said in a statement.

"On a 12-month basis, overall inflation and inflation for items other than food and energy are running below 2 percent," the central bank's inflation objective, the FOMC said.

Noting that trade policy is weighing on the growth outlook, Fed Chairman Jerome Powell said at a press conference Wednesday afternoon that monetary policy can counteract weakness to some extent, but "there's a piece of this that we really can't address."

"We need to look through what's a pretty volatile situation," said Powell. "That means, not overreacting quickly, it means not underreacting too. That's what we're trying to do."

When asked about how he viewed the divided opinions, Powell said at the press conference that this is difficult judgement, and such division is "nothing but healthy."

U.S. President Donald Trump again lashed out at the central bank shortly after the rate cut announcement, saying in a tweet that "Jay (Jerome) Powell and the Federal Reserve Fail Again. No 'guts,' no sense, no vision! A terrible communicator!" The president had repeatedly demanded a larger cut.

In response to a question regarding Trump's comment, Powell reaffirmed the central bank's independence. "I assure you that my colleagues and I will continue to conduct monetary policy without regard to political considerations. We're going to use our best judgment based on facts, evidence and objective analysis in pursuing our goals," he said.

Seven out of the 17 Fed officials expect one more rate cut this year, and the central bank's median forecasts for rates suggested no more cut this year, according to the latest FOMC participants' assessments of appropriate monetary policy, which was also released on Wednesday.

"Our eyes are open, we're watching the situation," Powell said, without specifying the Fed's next move. "I'd love to be able to articulate a simple, straightforward, stopping rule, but it'll be when we think we've done enough."