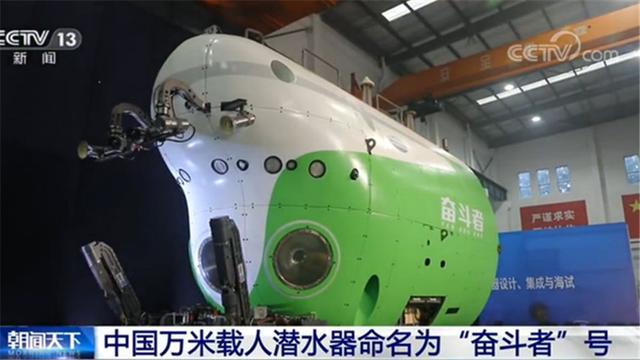 Designers of China's latest domestically developed scientific submersible, the Fendouzhe, or Striver, are now striving for another goal: to offer underwater tours by submersible to members of the public.

This latest development comes as China prepares for manned expeditions for scientific exploration with Fendouzhe to the deepest part of the oceans－the bottom of the Mariana Trench in the western Pacific Ocean.

The submersible was designed at the China Ship Scientific Research Center in Wuxi, Jiangsu province, a subsidiary of State-owned shipbuilding conglomerate China State Shipbuilding Corp that specializes in underwater equipment.

Chen Jiawei, from the center's technology and application department, said in an exclusive interview with China Daily that designers have developed two types of tourist submersibles and expect to use them for people interested in deep-sea diving.

"The smaller model, which we named Huandao Jiaolong, has been built and received approval for business operation from the maritime safety authorities," he said.

"Piloted by two operators, it can carry 10 tourists to a depth of 40 meters in an underwater journey that can last up to eight hours."

The 7.9-meter vehicle weighs 23.9 metric tons and has an underwater speed of about 1 knot.

The center's engineers are also constructing a larger type of vehicle, which has yet to be named, he said.

The new model's structure has been finished and engineers are installing equipment in it.

Once completed, the 16.3-meter submersible will be able to take 23 people－three pilots and 20 tourists－to a depth of 60 meters in a standard eight-hour trip, said its chief designer, who wished to be identified as Gao.

Gao added that the electrically propelled craft can also conduct underwater search and rescue missions as it will be able to remain underwater for as long as 72 hours.

Project managers plan to conduct a trial run in a reservoir in Guizhou province upon its completion and then decide its next destination, he said.

Currently, the nation operates two manned deep-sea submersibles－Jiaolong, or Sea Dragon, and Shenhai Yongshi, or Deep-Sea Warrior. Both of them were designed and built by the country's engineers.

Jiaolong entered service in 2010, making China the fifth country in the world with deep-sea exploration technology after the United States, France, Russia and Japan. During a test dive in June 2012, it reached its greatest depth－7,062 meters－in the Mariana Trench.

With a 4,500-meter diving capability, Shenhai Yongshi was delivered to the Chinese Academy of Sciences in late 2017 and is involved in intensive scientific operations.

Fendouzhe will make its first attempt to carry its crew to the Challenger Deep－the deepest point in the Mariana Trench－before the end of this year, according to sources at the China Ship Scientific Research Center.