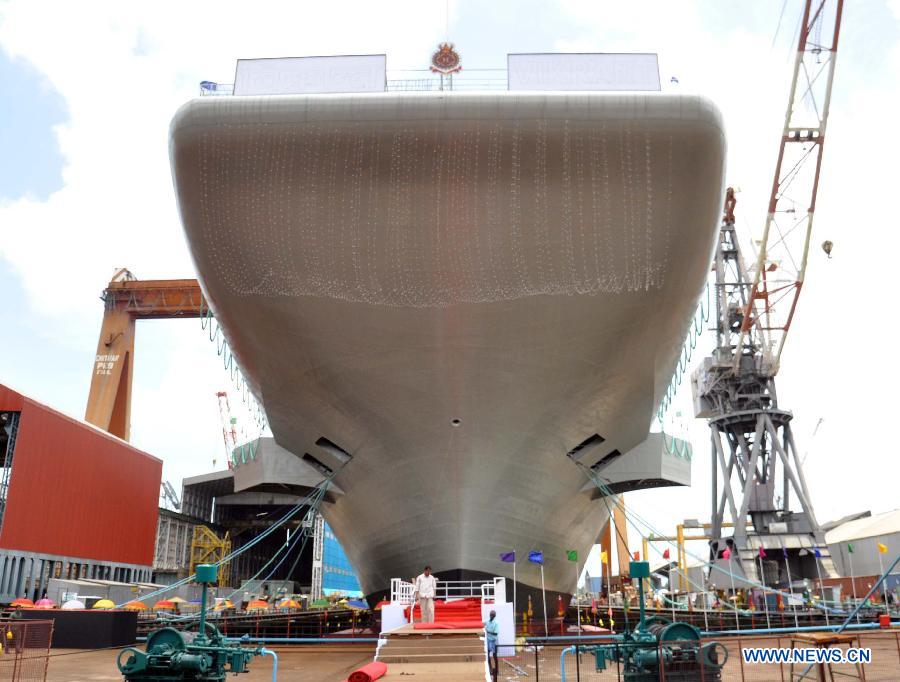 India's indigenous aircraft carrier INS Vikrant, built by the Cochin Shipyard Limited for the Indian Navy, is docked at the Cochin Shipyard Limited in Kerala, on Aug. 11, 2013. India launched its first indigenous aircraft carrier Monday, which will put the country in the league of nations to have such a capability, a top defense official said. (Xinhua/stringer)

India on Monday took a giant leap in the defense sector by unveiling its first indigenous aircraft carrier, INS Vikrant, at Kochi shipyard in the southern state of Kerala.

Indian Defense Minister A.K. Antony's wife Elizabeth on Monday morning formally launched what is being claimed as the biggest warship to be built in this country, the 37,500 tonne aircraft carrier with a length of 260 meters and a breadth of 60 meters, and a flight deck almost twice the size of a football field.

"It's a remarkable milestone. The launch marks just the first step in a long journey. We must continue the process of developing indigenous capability to secure our maritime interests," the Indian Defense Minister said on the occasion.

With this, India joined a select group of countries capable of building such an aircraft carrier such as the United States, Britain, Russia and France.

In fact, this formal launch marked the end of the first phase of the construction of the ship which will be re-docked for outfitting and further construction. The aircraft carrier will be readied for extensive sea trials by 2016 and is to be commissioned into the Indian Navy in 2018.

The ship, once fully built at the Cochin Shipyard Limited, will be equipped with modern weapons systems including long-range, surface-to-air missiles and close-in weapons system. It is able to attain a speed in excess of 28 knots.

Officials say that India's home-made Light Combat Aircraft, MiG- 29K combat jets and a range of helicopters, will be deployed on the carrier once it is commissioned into the Indian Navy.

Defense analysts say that India has earmarked billions of dollars to upgrade its mainly Soviet-era military equipment to strengthen its defense capabilities.

"The Indian Navy already has an aircraft carrier in operation but the British-built warship is to be phased out soon. Another warship, INS Vikramaditya, is to be delivered by Russia later this year. And, when INS Vikrant is commissioned, India aims at becoming a dominant sea power in this region," said Delhi-based expert Ravi Desai.