The International Olympic Committee wants more clarifications from the Russian government on the anti-gay law ahead of the 2014 Sochi Winter Games, according to The Moscow Times. 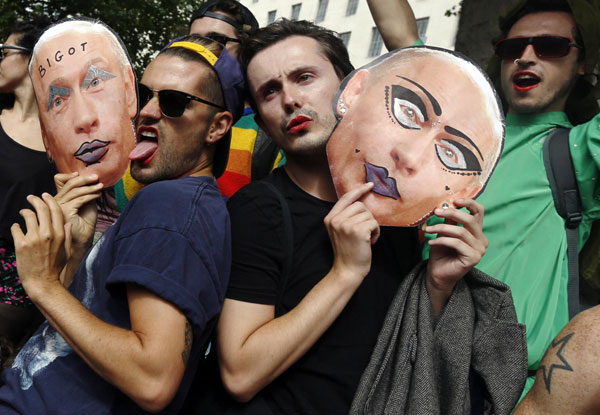 Demonstrators hold up masks of Russia's President Vladimir Putin during a protest against Russia's new anti-gay propaganda law, outside Downing Street in central London August 10, 2013. Hundreds of people in London on Saturday called for the government to push Russia to repeal the laws, that have attracted international condemnation. [Photo/Agencies]

The law bans "propaganda of nontraditional sexual relations" and imposes fines on those holding gay pride rallies. It has caused a major international outcry and spawned calls for protests ahead of the Winter Olympic Games.

The IOC insisted Monday that there must be no restrictions on athletes in Sochi next year. The IOC asked the Russians last week to provide written re-assurances about how the law will be applied.

C.K. Wu, an IOC executive board member, said the Russians must "fully understand" that the human rights of athletes, as enshrined in the Olympic Charter, have to be respected during the February 7-23 Olympics in the Black Sea resort.

"We want to know during the games what will happen in different situations," Wu said. "What are you (Russia) going to do? So we are waiting for them to really respond."

Russian Sports Minister Vitaly Mutko insisted last Thursday that Olympic athletes would have to respect the laws of the country during the Sochi Games. On Friday, he said there was no way Russia would back down under political pressure.