BEIJING, April 29 (China Economic Net) - “Belt and Road Initiative has provided huge economic potentials and diplomatic opportunities for all countries involved in it, and will bring changes to the lives of more than 1 billion people. The Senate of Pakistan will stay determined to support the government in all BRI related activities,” Pakistani Deputy Chairman of Senate Saleem Mandviwalla said while receiving the interview by China Economic Net (CEN). He was visiting China by the middle of this month with the invitation of Wang Yang, Chairman of the Chinese People’s Political Consultative Conference National Committee (CPPCC). 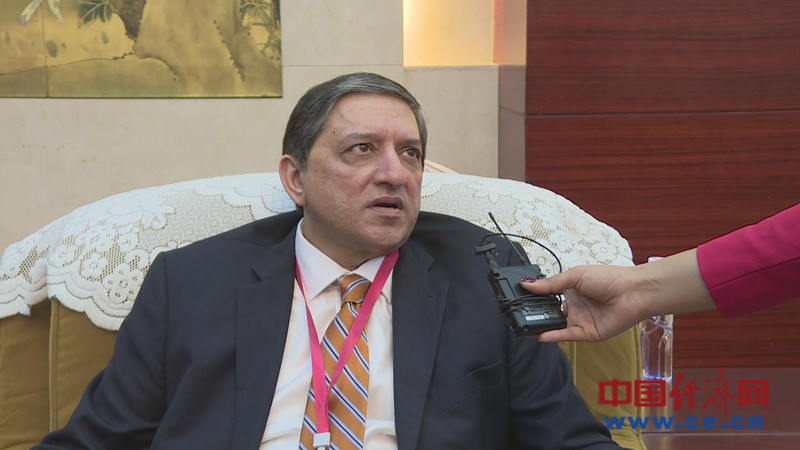 He said, “As the flagship project of BRI, China-Pakistan Economic Corridor (CPEC) is a practical manifestation of our common vision of inclusive and shared development. CPEC serves as a link to connect the Silk Road Economic Belt and the 21st-century Maritime Silk Road. Pakistan is committed to timely completion of CPEC projects and welcomes all potential investors to take benefit of the Special Economic Zones (SEZs).”

The senator also informed the gathering that the Senate of Pakistan and the government are on the same page as far as BRI is concerned. He elaborated “the parliament has been there to support the government, assisting them through conducting necessary legislation, budget, financial instruments, and FTA, etc. We will help the government in any way they require.”

BRI is A Global Phenomenon

Saleem was also invited to attend the Seminar on “Belt and Road Development” held before the 2nd Belt and Road Initiative. As the core of the seminar, two books were launched: Report on BRI Progress 2018 and The 4th Industrial Revolution and BRI Practices.

While addressing the participants, Saleem appraised the 2 books as a guidance that will help people to understand how the B&R Initiative has benefited the participating countries and promoted integrated regional economic growth.

He said, “The 2018 report recognizes the achievements and successful experience of the cooperation framework under the BRI and explains to the world why it has become the center of attention across the globe.”

In last October, around 100 members of parliaments from 26 Asian, African and European countries attended the APA meeting hosted by the Senate of Pakistan in Gwadar - a future hub of Asian trade. During the three-day event from 29th to 31st, the member countries of the APA deliberated on future prospects for economic cooperation, and proposed overall objectives and guiding principles to envision an integrated and peaceful Asia. Senator Saleem recalled the meeting as another chapter of BRI, for “nearly all the countries in APA gave presentations on the BRI.”

Saleem believes Pakistan and China’s common vision of shared prosperity through inter-connectivity is also aligned with the Asian Parliamentary Assembly (APA). “I have complete confidence that China as an emerging global economic leader and creator of BRI will play an important role for the APA and other Asian forums in the 21st Century,” he said.

“BRI is a global phenomenon,” Saleem continued, “Though the senators and senior officials I’ve met from Canada, the United States and other western countries have shown their concerns and doubts over what the BRI is, they are also thinking about getting involved in the initiative .”

Italy has been the first G7 nation to officially endorse China’s Belt and Road Initiative (BRI); Luxembourg has signed memorandums of understanding (MoUs) on jointly building the Belt and Road cooperation; German, France, Britain, New Zealand and more countries have shown their interests in the BRI.

Pak-China Joint Venture in Movie, Tourism to be furthered

That the friendship between China and Pakistan is higher than Himalayas, deeper than the Arabian Sea, and sweater than honey is a proverb that prevails in both countries. However, Saleem said, “Not many people truly understand how deep and serious this friendship is. We are not just close friends, but strategically involved in each other’s policies.”

To further people-to-people exchanges, he suggested the 2 countries encourage joint production of movies, TV series, as well as extend cooperation in tourism. “Business contact in the private sector could be enhanced if people-to-people exchange can flourish. That’s why we should take concrete measures to improve the images of both countries in the minds of our people,” Saleem said.

“We have reached a very structural working arrangement between the Senate of Pakistan and the CPPCC, which was never done before. With the support of Mr. Wang, we will be able to achieve the start of operations with these 2 parliamentary bodies and achieve our goals.”

Hailing the time-tested friendship between the two countries, Wang said that bilateral ties have maintained sound momentum and constant progress has been achieved in friendly cooperation.