The kinnows in Sargodha about 25 Rs per kg are now sold 19.96 yuan on the ecommerce platforms in China. That is about 455 Rs, around 18 times of the price in Pakistan. 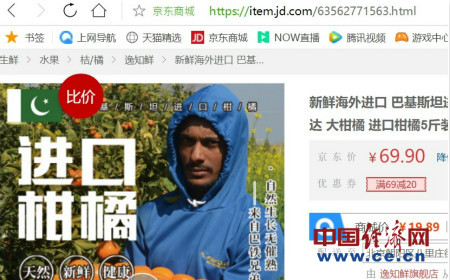 On February 21, 2,650 boxes of Pakistani kinnows, after month-long sea transport, reached Northeast China's Dalian port for customs clearance. This is the first successful and effective entry of Pakistani kinnows into the Chinese market in the past three years. China suffered COVID-19 epidemic while Pakistan saw locust plague then.

Hafeez Adnan, a Pakistani graduate with a master degree of Orthopedic Surgery at Dalian Medical University. On the evening of February 21, Adnan changed his usual style of sending text messages and told the reporter from China Economic Net (CEN) via WeChat voice that “This time, I finally got it. The kinnows are cleared!" On January 22, a full container of 2,650 boxes of Pakistani citrus set sail from Karachi Port.

The appointment for CEN reporter was on Sunday afternoon (Pakistan time), Adnan kept talking for one hour and eight minutes. "There are 21 companies in Pakistan qualified to process citrus that can be exported to China. I started to contact those companies one by one since the last kinnow season, that is, the autumn of 2018. At the beginning, no one was willing to do it, or dared to do it. They are afraid that they may not pass the inspection in China due to its strict quarantine standard. It’s the same situation with cold chain transportation. There are few containers with probe thermometer, and it's hard to get in touch amid the epidemic. Maersk (editor’s note: container carrier) has no feedback. Their online offer is twice as expensive as the one we find now,” said Adnan.

Adnan explained to the CEN reporter why Pakistan showed cautiousness in kinnow export to China, he said that if the kinnows released by Pakistan's quarantine department fail to pass the quarantine inspection after arriving in China, they are likely to be destroyed on the spot, and then Pakistani citrus exports will be re-inspected and re-evaluated. "Apart from all kinds of economic losses, Pakistani quarantine officials are likely to be dismissed due to joint liabilities. China-Pakistan friendship is a big thing in Pakistan. No one dares to make a single mistake. It is an official from the Ministry of Food, Agriculture and Livestock in Lahore that helped me,” he said. “Impressed by my sincerity for the business of citrus export, the official told me that he had inspected all the 21 companies, and one of them had high processing quality. If this company doesn't accept my order, there will be no one else. Then I contacted this company, it agreed, but told me there was no room for bargaining because the risk was high,” said Adnan.

Among the nearly hundred pages of Pakistani citrus information gathered by the reporter, there is the Protocol on Phytosanitary Requirements for the Export of Citrus Fruit from Pakistan to China, which was signed 15 years ago on April 5, 2005 between General Administration of Quality Supervision, Inspection and Quarantine of People’s Republic of China, now merged into the General Administration of Customs of the People’s Republic of China, and Ministry of Food, Agriculture and Livestock of the Islamic Republic of Pakistan. There are 15 articles in the text of the protocol, the longest of which is article 9. It stipulates that if Bactrocera dorsalis or Bactrocera zonata is found alive when Pakistan's citrus exported to China arrives at the designated entry port, the citrus shall be returned or destroyed. At the same time, Chinese side shall notify Pakistani side to suspend citrus exports to China and request Pakistani side for rectification. If other pest listed in the annex of the protocol is found, China shall decide to suspend the export qualifications of relevant processing plants and exporters according to the interception and both sides shall carry out investigations.

"Generally speaking, a worker can process several containers of citrus per day, but for Chinese orders, only 200 to 300 boxes can be processed in a day. Pakistanis think that the citrus export standards for Russia, Malaysia and Indonesia are strict enough, but these are not comparable to those of China's. It is not exaggerating to say that there are risks of dismissal of officials and termination of business. The more than 2,000 boxes of citrus that arrived in Dalian this time, calculated on the average of 70 per box and totaled over 185,000, were really picked out by the Pakistanis one by one," Adnan said. 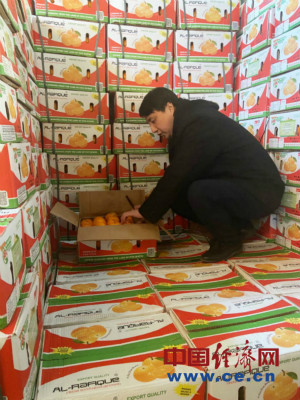 Photo shows Zhao Yong is busy with the imported Pakistani kinnows these days.

Zhao Yong, general manager of Youlianfeng Trade Dalian, is Adnan's Chinese partner. Due to his busy schedule, Zhao accepted CEN reporter’s WeChat friend request three days later. "I feel really sorry but I am busy with the Pakistani citrus these days. I mainly run e-commerce business. The citrus is of high quality and quickly released by the customs. The loss during transportation is only 3‰ while generally 3% is already regarded as good. They must have been perfect when loaded in Pakistan. "

According to Zhao, the ship arrived at the anchorage of Dalian port on February 14, reached port on February 17 and started to go through customs inspection on February 18. "Due to the epidemic and the blizzard in Dalian, usually we need to wait for one week. But the process in Dalian Customs did not have any delay. When we started planning to import Pakistani citrus at the beginning of last year, it was the customs expert group that recommended us to do cold treatment during shipping. We found information that in early 2017, a container of Pakistani citrus’ cold treatment was not done until it reached port. One month's sailing time plus more than 20 days of cold treatment made the citrus already deteriorated," Zhao said. 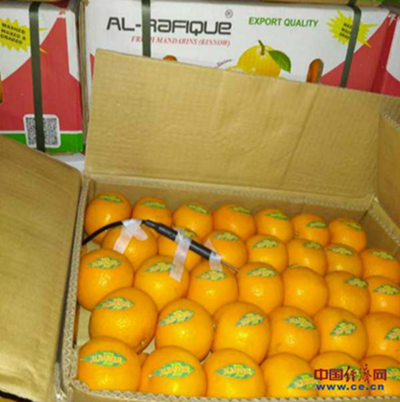 “The cold storage data is not available to the public, which is the shipping company's regulation. This time, Orient Overseas Container Line, which was acquired by China Ocean Shipping Company two years ago, helped a lot. There is a slight deviation in our cold storage data, but according to the protocol between the two countries, the range of plus or minus 0.1 degrees is allowed. In addition, the fruit has been cold treated for 26 days, longer than required. The customs said that both sides attach great importance to China-Pakistan friendship and flexibility might be applied within the scope of principles,” Zhao said.

The reporter had tasted kinnow in Sargodha, Pakistan's main citrus producing area, when she interviewed there earlier this year. It had seeds and was slightly sour. "The sugar content of China’s sugar orange is 11.5, while the sugar content of Pakistani kinnow we measured this time is from 13.6 to 14. It tastes sour because Chinese mandarin varieties are gradually improved and the acidity has been basically removed. The sweetness of Pakistani citrus is actually higher than ours, but it retains the original acidity, which is the flavor of oranges in our childhoods, " Zhao introduced.

Through rounds of communications with relevant professionals, Adnan decided not to export to China the largest oranges with 44 pieces in one box this time. Too big fruit will evaporate quickly during shipping. And fruits with less juices are easier to fall frozen in the cold storage. “So, this time we choose 10 kg per carton, which are packed with 60, 66, 72 and 80 pieces respectively,” he added.

During interviews in Pakistan earlier, the reporter learned that the price of kinnow in Pakistan is about 25 rupees per kilogram, that is, 0.56 yuan per jin. "Wholesale prices of citrus imported from Australia to China are 5 to 6 yuan per jin. The capital turnover rate of the fruit industry is generally 8 to 10 days, but it takes 1 month to import Pakistani fruits, plus processing, land transportation, promotion and other time, the capital turnover rate is generally 5 times and the risk is high. Many of our peers say that we are so adventurous," Zhao said.

But there must always be a pathfinder. It is also a special sentiment to import Pakistani products to China, it is the same with Adnan, Zhao added.