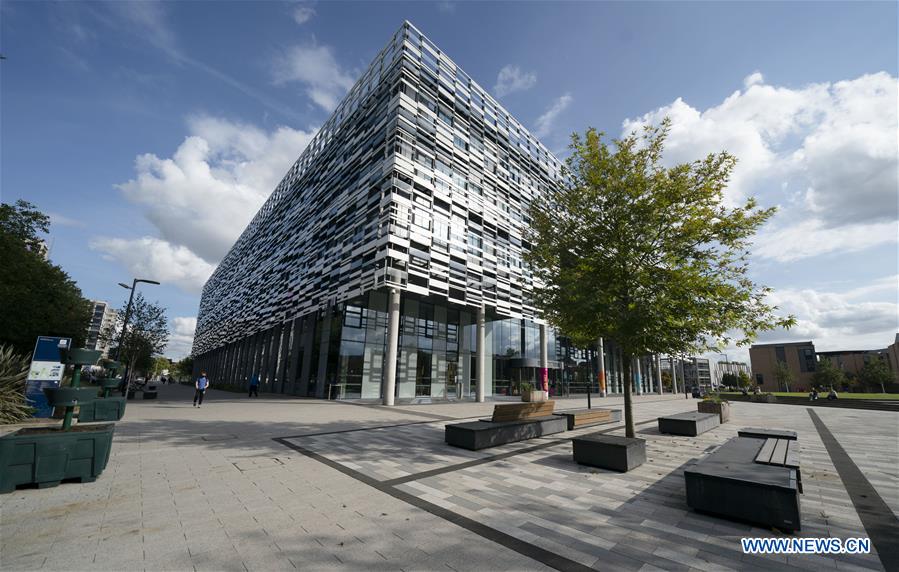 Photo taken on Sept. 29, 2020 shows part of the Manchester Metropolitan University campus in Manchester, Britain. Another 7,143 people in Britain have tested positive for COVID-19, the highest daily total ever since the start of the pandemic in Britain, according to official figures released Tuesday. According to The Guardian newspaper, COVID-19 outbreaks have been reported in at least 50 campuses across Britain. Manchester Metropolitan University has asked around 1,700 students to self-isolate after 127 cases were confirmed. (Photo by Jon Super/Xinhua)

Another 7,143 people in Britain have tested positive for COVID-19, the highest daily total ever since the start of the pandemic in Britain, according to official figures released Tuesday.

The newly confirmed infections brought the total number of coronavirus cases in the country to 439,013, the official data showed.

The coronavirus-related deaths rose by 71 to 42,072, according to the latest data.

Amid grave concerns over outbreaks in the universities, British Education Secretary Gavin Williamson said Tuesday that universities have been asked to provide "additional help and practical support" to students, while ensuring the students who are isolating are "properly cared for" and can get food, medical and cleaning supplies if needed.

According to The Guardian newspaper, COVID-19 outbreaks have been reported in at least 50 campuses across Britain.

"We will never be in a position where we can eliminate all risk...But we will not condemn a generation of young people by asking them to put their lives on hold for months or years ahead," Williamson told MPs in a statement.

"We believe that universities are very well prepared to handle any outbreaks as they arise."

In the face of a sharp rise in coronavirus cases, further restrictions were announced Monday for people living in northeastern England, including "legal restrictions on indoor mixing between households in any setting".

Local media reported that just under a quarter of people in Britain now are living under different lockdown restrictions.

The reports came as countries, such as Britain, China, Russia and the United States, are racing against time to develop coronavirus vaccines.

The British government's Chief Scientific Adviser Patrick Vallance has said that it is possible that some vaccine could be available in small amounts later this year, but it is more likely that a vaccine will be available early next year, although that is not guaranteed. Enditem