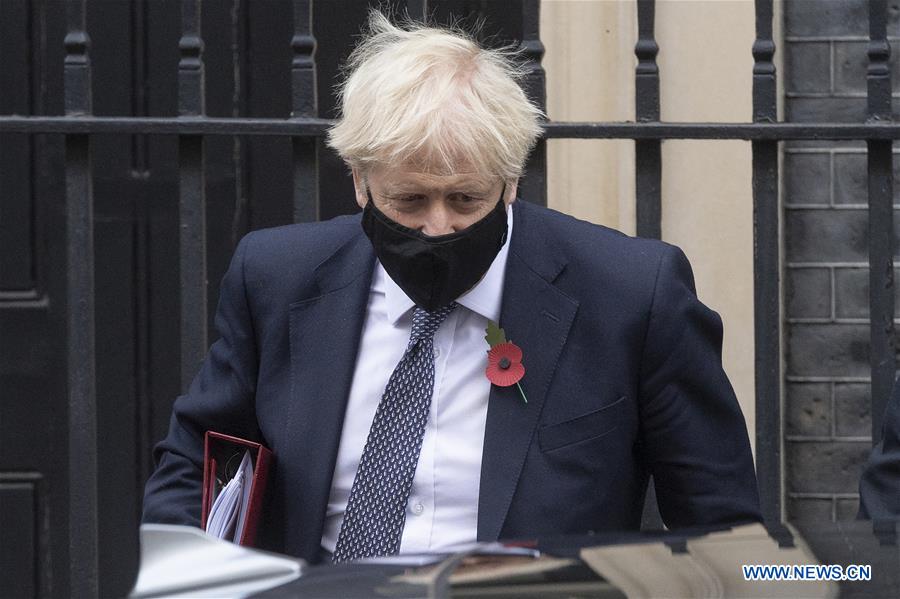 British Prime Minister Boris Johnson leaves 10 Downing Street for Prime Minister's Questions at the Houses of Parliament in London, Britain, on Nov. 4, 2020. British lawmakers on Wednesday voted in favor of the government's a month-long lockdown for England by 516 votes to 38, a majority of 478. (Photo by Ray Tang/Xinhua)

British lawmakers on Wednesday voted in favor of the government's a month-long lockdown for England by 516 votes to 38, a majority of 478.

The vote outcome paved the way for the new measures, announced by British Prime Minister Boris Johnson on Saturday in a bid to quell the surging coronavirus infections.

The approval came as scientists warned the British National Health Service (NHS) would be overwhelmed with thousands more deaths unless action is taken.

During a debate in the House of Commons (lower house of parliament) ahead of the vote, Johnson said he hoped businesses would be able to re-open again in the run-up to Christmas.

However, he warned that Britain could suffer deaths "on a grievous scale" with hospitals in "extraordinary trouble" by next month without action.

Under the lockdown, which will be effective from Thursday until Dec. 2, people in England will only be allowed to leave their homes for specific reasons, such as education, work or food shopping.

Pubs, bars and restaurants will close across the country except for takeaways. Non-essential shops, hairdressers and leisure and entertainment venues will also be shut.

Meanwhile, different households will be banned from mixing, although support bubbles and childcare bubbles will remain. Gyms will be shut but people can continue to exercise outdoors, at most with one person from another household.

Schools, colleges and universities will remain open and those who cannot work from home, such as construction or manufacturing workers, will be encouraged to continue going to their workplaces.

The lockdown, second of its kind since the start of the COVID-19 pandemic in this country, was "not something any of us wanted to do," Johnson said.

But he added: "I am not prepared to take the risk with the lives of British people."

"While it pains me to call for such restrictions on lives, liberty and business I have no doubt that these restrictions represent the best and safest path for our country," he told the parliament.

Britain is the ninth country to reach the milestone of a million cases after the United States, India, Brazil, Russia, France, Spain, Argentina and Colombia.

To bring life back to normal, countries, such as Britain, China, Russia and the United States, are racing against time to develop coronavirus vaccines. Enditem