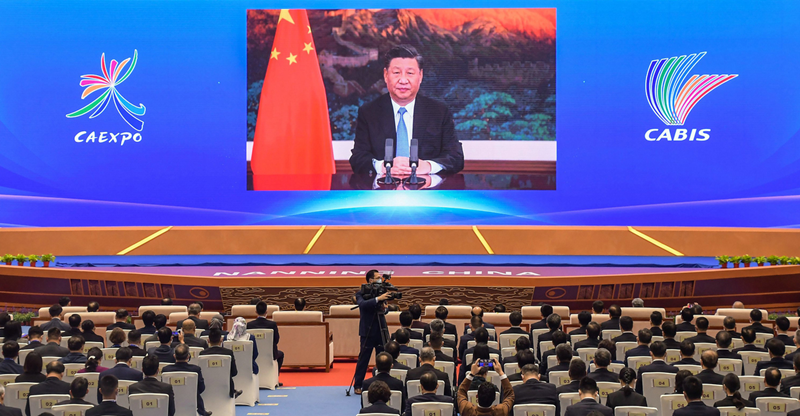 President Xi Jinping delivers a speech via video at the opening ceremony of the 17th China-ASEAN Expo and China-ASEAN Business and Investment Summit, which got underway on Friday in Nanning, the Guangxi Zhuang autonomous region. CHINA DAILY

President Xi Jinping reiterated China's pledge to see the Association of Southeast Asian Nations as a priority in its neighborhood diplomacy and a key region in high-quality Belt and Road cooperation on Friday, as he called upon enhanced bilateral economic and trade cooperation to accelerate regional economic recovery.

In a speech delivered via video link at the opening of the 17th China-ASEAN Expo and China-ASEAN Business and Investment Summit, Xi highlighted the need for the two sides to sustain the smooth flow of trade, promote mutual investment, open up markets wider to each other, and foster deeply integrated industrial, supply and value chains.

The expo and summit are being held Friday through Monday in Nanning, the Guangxi Zhuang autonomous region. Over 1,500 businesses, including 332 foreign businesses, will also take part in an online expo that runs throughout the year.

In his speech, Xi said the expo should be used as a platform with a bigger role to play in promoting all-around economic and trade cooperation among China, ASEAN and the entirety of East Asia.

"China and ASEAN countries, connected by the same mountains and rivers, share close affinity and a long-standing friendship," he said, noting that the bilateral relationship has grown into the most successful and vibrant model for cooperation in the Asia-Pacific, and is an exemplary effort in building a community with a shared future for mankind.

With the world undergoing major changes unseen in a century and the destinies of people in different countries closely connected like never before, Xi underscored China's continued support to ASEAN's community-building and the bloc's centrality in East Asian cooperation.

"China will work with ASEAN to advance all-around cooperation under the guidance of the Strategic Partnership Vision 2030," he said.

The two sides need to step up innovation in science and technology and bolster cooperation on the digital economy, he said.

"We could create more highlights of cooperation in such areas as smart city, 5G, artificial intelligence, e-commerce, big data, blockchain and telemedicine, and strengthen the protection of data security and policy communication and coordination," he said.

The president also highlighted the significance of heightened bilateral cooperation against COVID-19 and stepping up capacity building in public health.

China will actively consider the needs of ASEAN countries once its COVID-19 vaccines are available for use, and the country will offer financial support to the COVID-19 ASEAN Response Fund, he said.

"China will stay as committed as ever to further opening-up, and will seek greater synergy through the interplay of its domestic and world economies. The country will fuel a worldwide recovery with its own economic rebound, and countries around the world, ASEAN members included, will all benefit from it," he said.

ASEAN overtook the European Union to become China's largest trading partner for the first time this year, with bilateral trading volume reaching 3.79 trillion yuan ($575.76 billion) in the first 10 months, up by 7 percent year-on-year.

Business leaders at the opening ceremony of the expo said Xi's speech has strengthened their confidence to seize opportunities arising from enhanced China-ASEAN cooperation.

Zeng Guangan, chairman of Guangxi LiuGong Group, said Xi's speech encouraged his company to manage its overseas business in a more open, cooperative way, and to leverage the platform of the China-ASEAN Expo for more cooperation in both domestic and overseas markets.