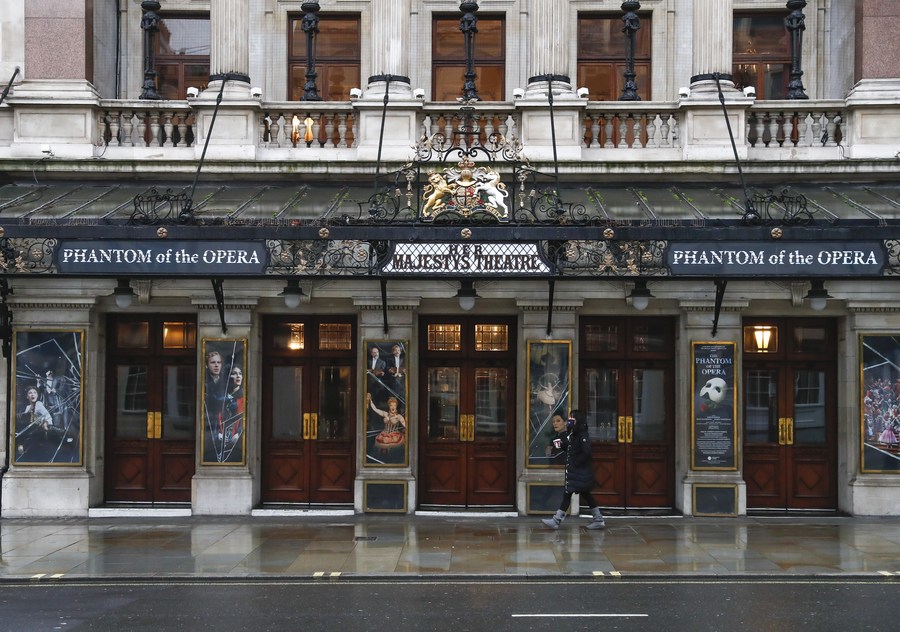 A woman wearing a face mask walks past Her Majesty Theatre in London, Britain, on Dec. 21, 2020. (Xinhua/Han Yan)

Another 744 people have died within 28 days of a positive test, marking the highest daily increase of coronavirus-related deaths in Britain since the end of April, according to official figures released Wednesday.

The total number of coronavirus-related deaths in Britain now stands at 69,051, the data showed.

Another 39,237 people have tested positive for COVID-19, the highest daily increase since the start of the pandemic in the country, bringing the total number of coronavirus cases in the UK to 2,149,551, the data showed.

The figures were revealed as British Health Secretary Matt Hancock announced Wednesday at a virtual press conference here that more areas of the East and South East of England will be put into Tier Four restrictions, the highest level.

Under the new tougher measures, residents in Tier Four areas must stay at home, with limited exemptions. People are also urged to work from home when they can.

Meanwhile, Hancock said that another new variant of the novel coronavirus, reportedly related to travelers from South Africa, has been detected in Britain, and two cases have been reported so far.

"This new variant is highly concerning because it is yet more transmissible and it appears to have mutated further than the new variant that has been discovered in the UK," he said.

British Prime Minister Boris Johnson on Saturday announced the new Tier Four restrictions for London and other parts of England to combat an alarming surge in infections linked to a new virus strain, which is said to be about 70 percent more transmissible.