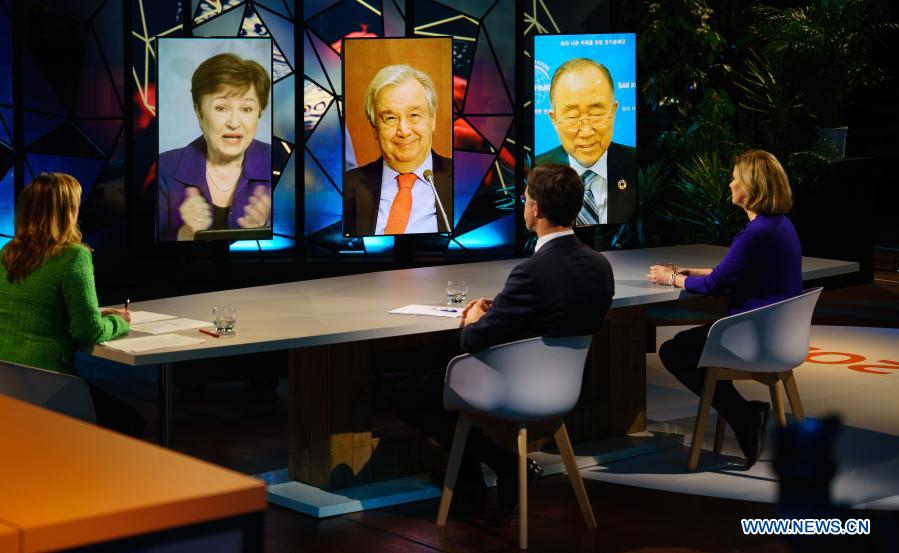 Photo taken in the Hague, the Netherlands, on Jan. 25, 2021 shows screens displaying International Monetary Fund (IMF) Managing Director Kristalina Georgieva, United Nations Secretary-General Antonio Guterres and Ban Ki-moon, former secretary-general of the United Nations, and co-chair of the Global Commission on Adaptation (L-R), attending the opening session of the Climate Adaptation Summit 2021 via video link. Leaders from all over the world opened here the first online international Climate Adaptation Summit (CAS) 2021 on Monday. Hosted by the Dutch government, the two-day summit aims to adopt a roadmap for a decade of transformation towards a climate-resilient future by 2030. (CAS/Handout via Xinhua)

United Nations Secretary-General Antonio Guterres on Monday urged donor countries and banks to significantly increase the volume and predictability of their finance for climate change adaptation and resilience.

"Donor countries and multilateral, regional and national development banks need to significantly increase the volume and predictability of their finance for adaptation and resilience," the UN chief told the Climate Adaptation Summit (CAS 2021).

The online global conference is aimed at accelerating, innovating and scaling-up the world's efforts in adapting the global societies and economies to the inevitable effects of climate change over the coming decade.

"We are already witnessing unprecedented climate extremes and volatility, affecting lives and livelihoods on all continents," said the secretary-general.

According to the World Meteorological Organization, there have been more than 11,000 disasters due to weather-, climate- and water-related hazards over the past 50 years at a cost of some 3.6 trillion U.S. dollars.

"Extreme weather and climate-related hazards have also killed more than 410,000 people in the past decade, the vast majority in low and lower middle income countries," said the top UN official.

This is the main reason that he has called for "a breakthrough on adaptation and resilience," Guterres said.

"We need the trillions of taxpayers' dollars funding the recovery from the COVID-19 pandemic to jump-start the low-carbon, high-resilience future we need. But recovery cannot only be for the developed world," he said.

"We must expand the provision of liquidity and debt relief instruments to developing and middle-income countries that lack the resources to relaunch their economies in a sustainable and inclusive way," he added.

"Huge gaps remain on financing for adaptation in developing countries," the secretary-general noted.

Guterres said that he has called for 50 percent of the total share of climate finance provided by all donors and multilateral development banks to be allocated for climate adaptation and resilience.

"Adaptation cannot be the neglected half of the climate equation," he noted.

Noting that the African Development Bank set the bar in 2019 by allocating over half of its climate finance to adaptation, the secretary-general urged all donors and multilateral development banks to commit to this goal by the 2021 United Nations Climate Change Conference, or known as COP26, and deliver on it by 2024.

"Let us remember that developed countries must meet the commitments made in the Paris Agreement to mobilize 100 billion dollars a year for mitigation and adaptation in developing countries," he added.

The UN chief stressed that all budget allocations and investment decisions need to be climate resilient.

"Climate risk must be embedded in all procurement processes, particularly for infrastructure," he said.

The secretary-general urged countries "to ease access to finance, especially for the most vulnerable, and expand debt relief initiatives."

Finally, he made a call "to support regional adaptation and resilience initiatives."

Guterres said that one person in three is still not adequately covered by early warning systems, and that risk-informed approaches "are not at the scale required."

Citing the fact as illustrated by the Global Commission on Adaptation that, a 24-hour warning system of a coming storm or heatwave can cut the ensuing damage by 30 percent, the secretary-general said that "we need to work together to ensure full global coverage by early warning systems to help minimize these losses."

"We have the tools, skills and opportunity to deliver 'more, faster and better' adaptation actions," said Guterres.

The CAS 2021 on Jan. 25-26, which is expected to jump-start a year of climate-related events, will link up with the World Economic Forum's Davos Agenda Week scheduled for Jan. 25-29.

The summit, hosted by the Netherlands government, creates a dedicated platform of global leaders and local stakeholders aimed at placing the world firmly on a pathway to accelerated climate adaptation and resilience. Enditem