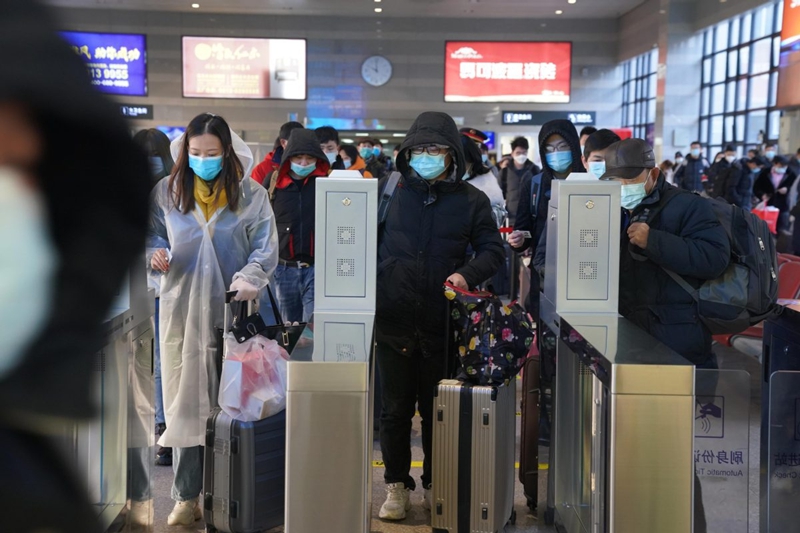 Passengers line up to check in at the Beijing West Railway Station in Beijing, Jan 28, 2021. [Photo by Feng Yongbin/chinadaily.com.cn]

As the Spring Festival travel rush kicked off on Thursday, transportation operators have tightened measures to prevent the resurgence of COVID-19 cases and provide better service to passengers.

The Ministry of Transport further cut on Thursday its forecast of passenger flow for the Spring Festival travel season as the country has adopted strict anti-epidemic measures to curb the spread of COVID-19.

On the first day of the Spring Festival travel rush, the country was expected to handle 19.91 million passengers trips.

According to the ministry, about 1.15 billion passenger trips were expected to be made during the 40-day travel rush, a year-on-year decline of 20 percent and more than 60 percent lower than in 2019.

"The number is changing constantly," Ministry of Transport spokesman Wu Chungeng said at a news conference on Thursday.

"The daily passenger trips are growing slightly based on the data for the past three days," he said, adding that the number might be lower than expected because people were advised not to travel during the holiday.

On Thursday, the civil aviation sector expected to handle 8,850 flights and 540,000 passenger trips, a year-on-year decrease of 46.7 percent and 71.2 percent, respectively.

The 40-day travel season started on Thursday and end on March 8. It is regarded as the world's largest annual human migration.

The Spring Festival holiday, which falls on Feb 12 this year, is China's most important holiday for family reunions. People usually gather to celebrate the weeklong festival.

This year, to curb the resurgence of the novel coronavirus, top authorities advised people not to travel and to celebrate the holiday where they work and live.

Transportation authorities also released guidelines to regulate measures to curb the virus, including wearing protective masks and increasing the frequency of disinfection.

Ren Mengyi, the chief conductress of a bullet train from Beijing to Harbin, Heilongjiang province, said the staff onboard will wear protective masks, goggles and gloves throughout the journey.

She said staff members are also required to remind passengers to wear masks, and the train is regularly disinfected, with special attention paid to frequently touched items such as door handles.

Likewise, similar measures are carried out on flights, ferries and long-distance buses, as well as at airports, bus stations and piers.

Also, passengers are required to follow epidemic control protocols during the journey, including presenting their health code, going through temperature checks and wearing masks.

To help reduce nonessential travel and lower the risk of the virus spreading, ticket return policies for rail and air travel have been changed to better serve customers.

According to the Civil Aviation Administration of China, flight tickets during the travel season can be returned or changed once without extra charge.

Meanwhile, China Eastern Airlines has scheduled about 8,000 flights to meet the demands of travelers during the Spring Festival travel rush.

According to the carrier, the most popular destinations include Shanghai, Xi'an, Qingdao, Chengdu, Guangzhou and Hangzhou, with each of their airports expecting to receive more than 100 extra flights during the peak period.

Compared with last year, air travel demand has been on the decline. Many trips have been canceled due to safety concerns arising from the emergence of new COVID-19 cases in China.

"The amount of air travelers has remained flat in the past few days, and on the first day of the travel rush, there has been no significant rise in passenger flow, probably because they are shelving their travel plans and have been dissuaded by the need for additional documents," said Yu Ping, a manager with China Eastern Airlines.

On the first day of the Spring Festival travel rush, 7,638 flights were canceled as of noon, accounting for 51.93 percent of the total planned flights of the day, according to data from Chinese aviation data and solution service provider AirSavvi.

Meanwhile, China Eastern Airlines and Shanghai-based budget carrier Spring Airlines both announced that customers who have bought tickets for flights during the 40-day period can apply for refunds or reschedule their trips for free.

All those traveling through the terminals at Shanghai's two airports are required to wear masks and have their temperature measured with infrared thermometers, according to the Shanghai Airport Authority.

The authority has also prepared masks, protective gear and disinfection products at departure halls to meet the needs of travelers, official sources said.

Li Junyao in Shanghai contributed to this story.