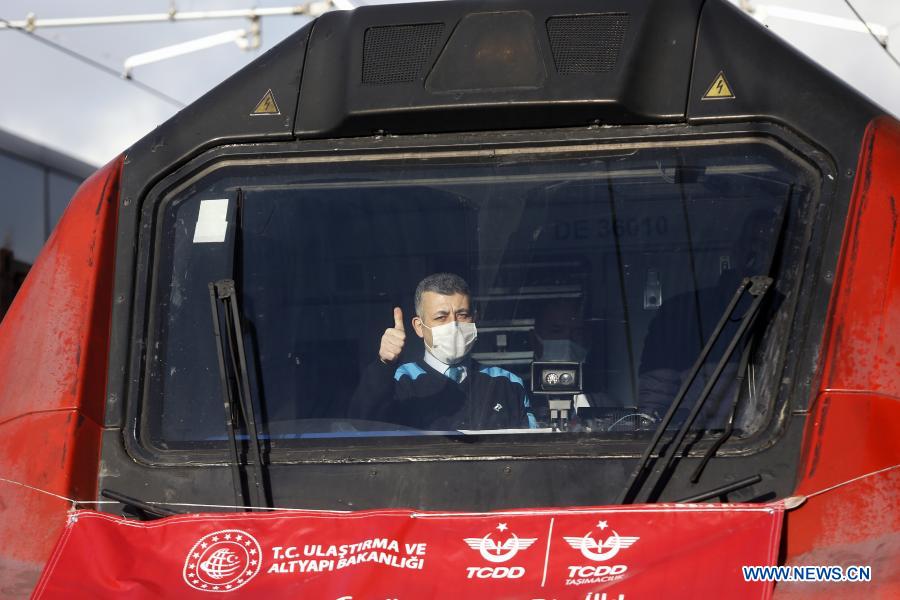 A crew member of an export freight train gives a thumbs up at a departure ceremony in Ankara, Turkey, on Jan. 29, 2021. The first block export freight train from Turkey to Russia and a new Turkey-China export train departed on Friday from Ankara. (Photo by Mustafa Kaya/Xinhua)

The first block export freight train from Turkey to Russia and a new Turkey-China export train departed on Friday from Turkey's capital Ankara.

"Following the Baku-Tbilisi-Kars railway line and successful completion of export railway services through the central hallway between Turkey and China in December, we are happy to send our first block export train from Ankara to Moscow," Turkish Transport and Infrastructure Minister Adil Karaismailoglu said at the ceremony at the train station.

The train en route to Moscow carries major appliances on 15 wagons and 15 containers for the 4,650-km distance, the minister said.

The train bound for China is carrying 1,000 tons of the mineral boron in 42 containers via the Baku-Tbilisi-Kars railway, Karaismailoglu noted.

The transit time between Turkey and China decreased to 12 days from 30 days thanks to this project, the minister added.