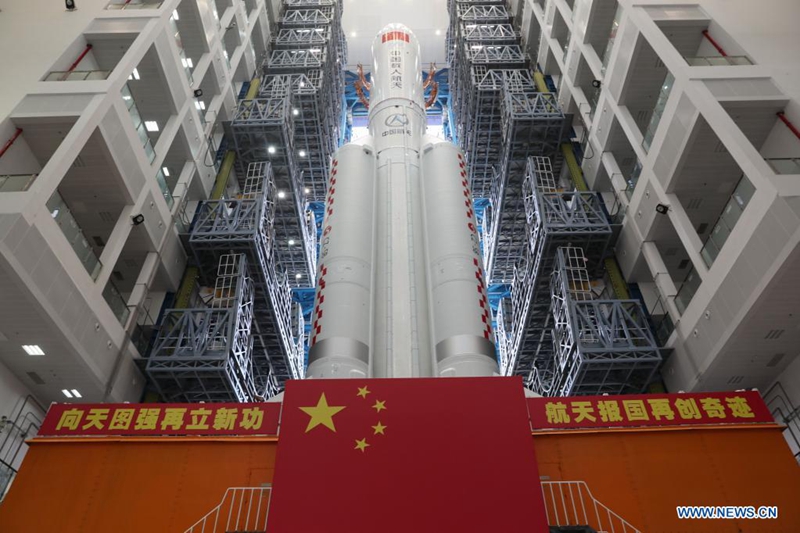 Photo taken on April 23, 2021 shows the combination of the core module of China's space station, Tianhe, and the Long March-5B Y2 rocket being transported to the launching area of the Wenchang Spacecraft Launch Site in south China's Hainan Province. The combination will then undergo various pre-launch function tests and joint tests as planned, according to the China Manned Space Agency (CMSA). The facilities and equipment at the launch site are in good condition and preparations have been carried out as scheduled, the agency said. (Photo by Guo Wenbin/Xinhua)

The Long March 5B carrier rocket tasked with launching the core capsule of China's space station was moved on Friday morning to the launch tower at the Wenchang Space Launch Center in Hainan province.

The China Manned Space Agency said that the rocket with the core capsule inside will begin pre-launch examinations. Currently, equipment at the coastal launch center is in good condition and personnel involved in the launch mission are making preparations, it noted.

The launch mission, the second flight for the Long March 5B, is scheduled to take place in the coming days, sources close to the mission said.

The station is expected to become fully operational next year and is set to operate for about 15 years, the program's planners have said.

The core capsule, named Tianhe, or Harmony of Heavens, is 16.6 meters long with a diameter of 4.2 meters. It will be central to the space station's operations, given that astronauts will live there and control the entire station from inside. The module will also be capable of hosting scientific experiments.

The capsule will have three parts－a connecting section, a life-support and control section, and a resources section.

After the capsule is launched, astronauts on the Shenzhou XII and XIII missions and two cargo ships will be launched within a few months to prepare the module for docking with other parts of the station.

Tiangong's two space labs will then be launched in separate Long March 5B missions and two more manned missions and two robotic cargo flights will be made to continue construction of the station.

The Long March 5B is the most powerful Chinese rocket when it comes to carrying capacity in a low-Earth orbit. It is essential to the space station program because it is now the only Chinese launch vehicle capable of carrying large space station parts into orbit.

The Long March 5B is 53.7 meters long, with a core-stage diameter of five meters. The rocket is propelled by liquid oxygen, liquid hydrogen and kerosene and has a liftoff weight of about 849 tons.

It conducted its maiden flight in May 2020 from the Wenchang space complex.