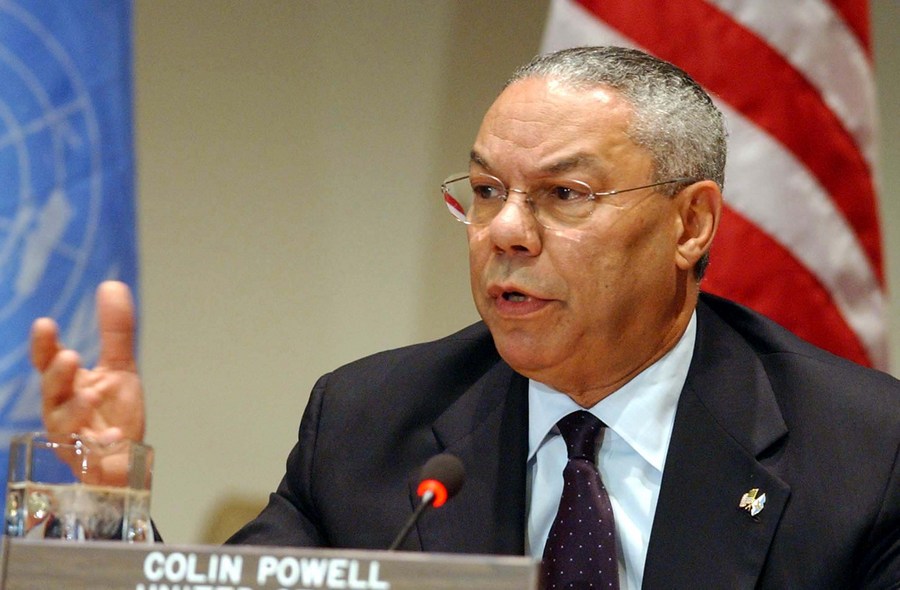 This file photo taken on Sept. 26, 2003 shows US Secretary of State Colin Powell addressing the media after the Mideast Quartet meeting of the United Nations, the United States, Russia and the European Union in New York. (Xinhua Photo/Peng Zhangqing)

Colin Powell, a former and the first African-American secretary of state, has died at 84 of COVID-19 complications, his family said Monday.

Powell's family said in a statement on Facebook that Powell, who also served as chairman of the Joint Chiefs of Staff before his role as the top U.S. diplomat, died Monday morning despite being fully vaccinated.

Yet he was best known and most controversial when he served as secretary of state under former President George W. Bush between January 2001 and January 2005, regarding his push for the U.S.-led invasion of Iraq in 2003 under the excuse that the Middle Eastern country possesses weapons of mass destruction, which was never proven.

In an address to the United Nations (UN) in February 2003, Powell presented what the U.S. intelligence community claimed was proof that Iraq had cheated on inspectors and hidden the WMDs.

"There can be no doubt," Powell said then, "that (then Iraqi President) Saddam Hussein has biological weapons and the capability to rapidly produce more, many more."

Such WMDs, it turned out, were never found in Iraq, and a report published in 2005 by a presidential commission said the intelligence community's assessment that Iraq had WMD capabilities before the U.S. invasion was "dead wrong."

"This was a major intelligence failure," said the Commission on the Intelligence Capabilities of the United States Regarding Weapons of Mass Destruction in the report.

In September 2005, Powell, who had stepped down from the post of secretary of state, confessed in a television interview that his 2003 UN speech was a "blot" on his record that would never go away.

Born in New York City to Jamaican immigrants, Powell is survived by his wife and three children.