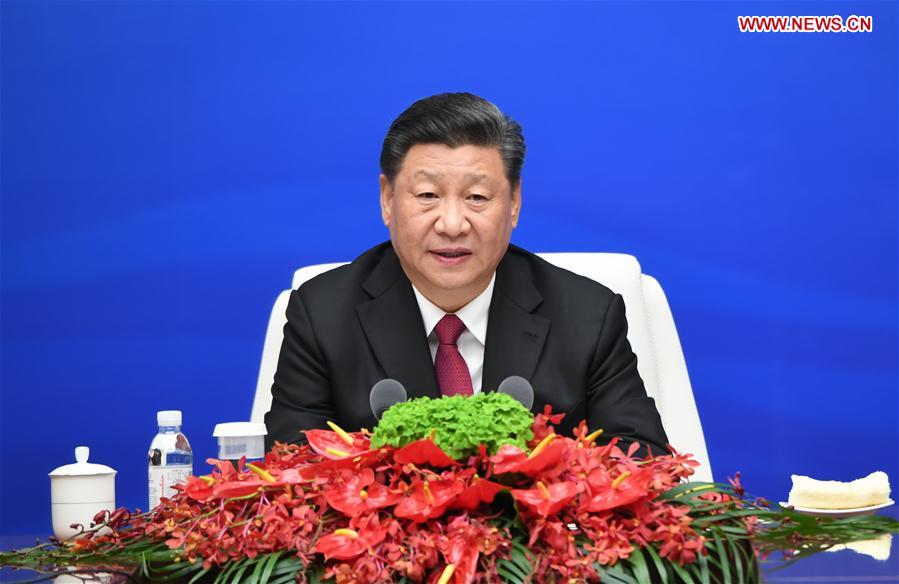 Chinese President and Central Military Commission Chairman Xi Jinping holds a group meeting with the heads of foreign delegations invited to the multinational naval events marking the 70th anniversary of the founding of the Chinese People's Liberation Army Navy in Qingdao, east China's Shandong Province, on April 23, 2019. Xi, on behalf of the Chinese government and military, extended warm welcome to naval officers and soldiers of various countries who are here for the events. (Xinhua/Li Gang)

Xi, also chairman of the Central Military Commission, made the remarks during a group meeting with the heads of foreign delegations invited to participate in the multinational naval events marking the 70th founding anniversary of the Chinese People's Liberation Army (PLA) Navy.

Oceans are of great significance to the survival and development of humanity as they breed life, connect the world and promote development, Xi said.

"The blue planet humans inhabit is not divided into islands by the oceans, but is connected by the oceans to form a community with a shared future, where people of all countries share weal and woe," he said.

Xi said maritime peace and tranquility concern the security and interests of all countries and need to be jointly maintained and cherished.

"The peace-loving Chinese people long for peace and will unswervingly stay on the path of peaceful development," Xi said.

China pursues a national defense policy that is defensive in nature and champions new thinking on common, comprehensive, cooperative, and sustainable security, he noted.

As the mainstay of forces at sea, the navies shoulder heavy responsibilities for safeguarding maritime peace and order, Xi said.

Xi called for joint efforts to address common threats and challenges at sea, and safeguard maritime peace and tranquility.

The reason for China to propose jointly building the 21st Century Maritime Silk Road, Xi said, is to facilitate maritime connectivity, pragmatic cooperation in various fields, and the development of the "blue economy," as well as to promote the integration of maritime cultures and to improve maritime wellbeing.

"The Chinese armed forces are willing to work with their foreign counterparts to actively contribute to maritime development and prosperity," Xi said.

"We should cherish oceans as we treat our lives," Xi said. He noted that China has fully participated in the formulation and implementation of maritime governance mechanism and related rules within the UN framework, and implemented the goal of sustainable marine development.

China pays great attention to the building of marine ecological civilization, persistently intensifies the prevention and treatment of marine pollution, protects marine biodiversity and orderly exploits the marine resources in order to leave a blue sky and clean ocean for future generations, he said.

"The sea is vast for it embraces so many rivers," Xi cited, calling for more and better consultations when there is an issue, instead of resorting to violence or threatening with violence.

All countries should consult as equals, improve the mechanism for communication in face of crises, strengthen regional security cooperation, and promote the proper solution to maritime disputes, according to Xi.

A high-level seminar on building a maritime community with a shared future will be held as part of the multinational naval events, he said.

Xi expressed hope that the delegations would gather their ideas, build consensus and contribute their wisdom to building a maritime community with a shared future.

Commander-in-Chief of the Royal Thai Navy Admiral Luechai Ruddit, on behalf of the heads of foreign delegations, thanked Xi for the meeting and congratulated the PLA Navy on its 70th founding anniversary.

Xi took a group photo with the heads of foreign delegations before the meeting.