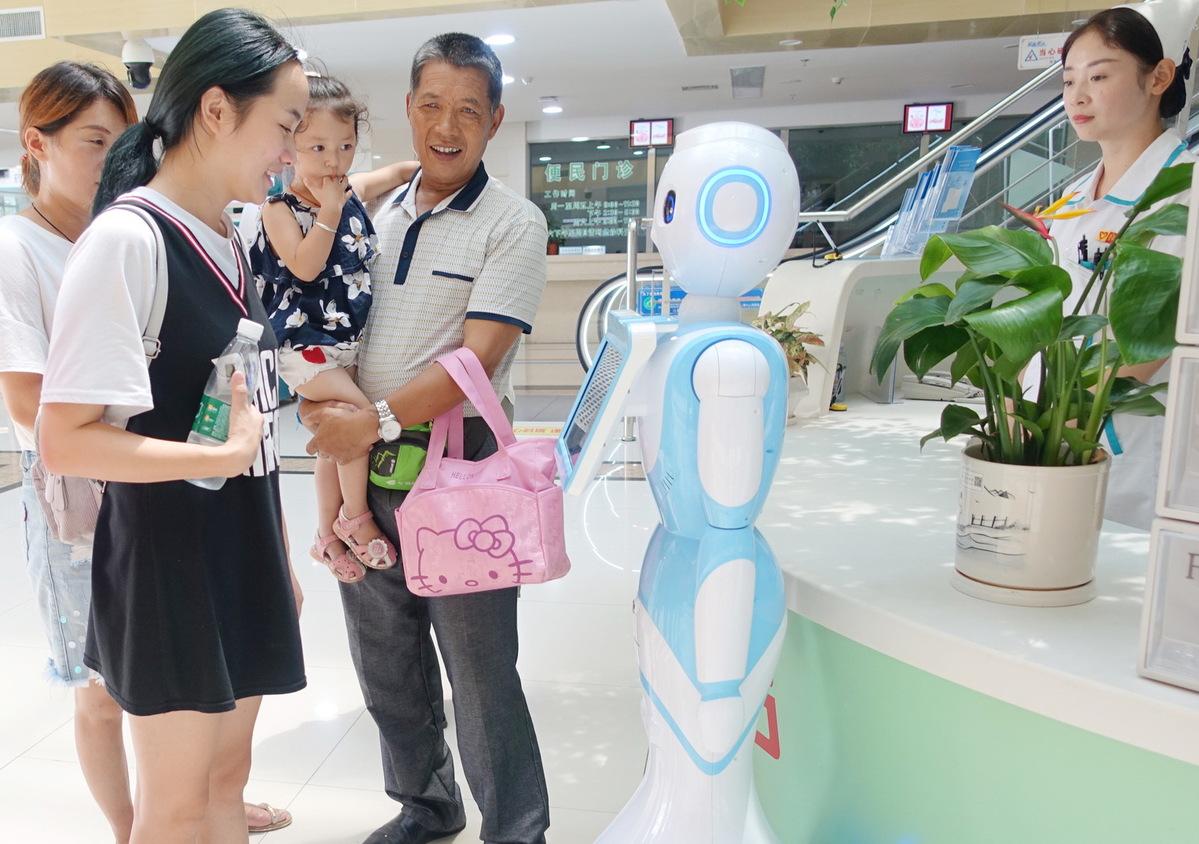 Visitors interact with a robot guide at Fuyang Women and Children Hospital in Fuyang, Anhui province, on Aug 2. [Photo by Wang Biao / For China Daily]

Shanghai is sharpening its focus on applying artificial intelligence to a growing number of real-life scenarios by hosting a world-class AI competition whose winners will be announced in September.

A three-month competition, the 2018 AIWin, is ongoing from June to August, during which AI specialists on robotics, machine-human interface, medical innovation and autonomous driving are sharing their research and exploring the possibilities for a wider variety of applications.

According to Chen Mingbo, director of the Shanghai Municipal Commission of Economy and Information Technology, the conference reflects the city's broader ambition to become the national leader in the AI sector, which had an output of 70 billion yuan ($10.2 billion) last year.

Pursuit of the SAIL award, the supreme honor of the contest that stands for Superior, Applicative, Innovative and Leading, has attracted about 600 teams from home and abroad to compete for the championships.

The contest has drawn experts from tech majors such as Alibaba Group Holding Ltd, Tencent Holdings Ltd, Baidu Inc and iFlytek Co Ltd, the voice recognition specialist, to provide insights as well as the technologies necessary for the games.

The four companies were recruited to an "AI national team" last year by the central government to have them each focus on specific fields including smart city administration, medical diagnosis, autonomous driving and voice recognition.

Experts said that Shanghai needs to take a firm grip of application scenarios and fundamental algorithm research in order to take a lead in the thriving sector.

Shanghai enjoys unique advantages in AI categories such as connected cars, smart manufacturing and medical image recognition, said Mao Junfa, an academician of the Chinese Academy of Sciences. The advantages include having several leading companies for the sectors as well as pilot zones where such technologies can be piloted.

For example, among a string of endeavors to uproot traditional industries using AI, residents in Shanghai and its neighboring Jiangsu, Zhejiang and Anhui provinces have stood to benefit from distant medical diagnosis and algorithm-backed disease detection services since June, where AI technologies are applied to store medical records and diagnose certain cancers at an early stage.

"Whereas pure-play internet companies can largely benefit from AI's adoption across a number of customer-facing scenarios, AI can be better employed to facilitate business-to-business sectors in the region, which is home to numerous small and medium-sized high-tech enterprises," said Li Zhu, founding partner of venture capital firm Innoangel.

Lu Sen, vice-director of the development and research center of Shanghai Municipal Commission of Economy and Information Technology, proposed the establishment of an AI-focused research institute in Shanghai to delve into core algorithm studies.

China released a three-step roadmap last July with the goal of making the nation a global leader in AI technology by 2030. The city is currently planning to set up an AI fund containing more than 100 billion yuan as well as 10 public platforms for AI innovation, six demonstration zones and 60 AI applications.