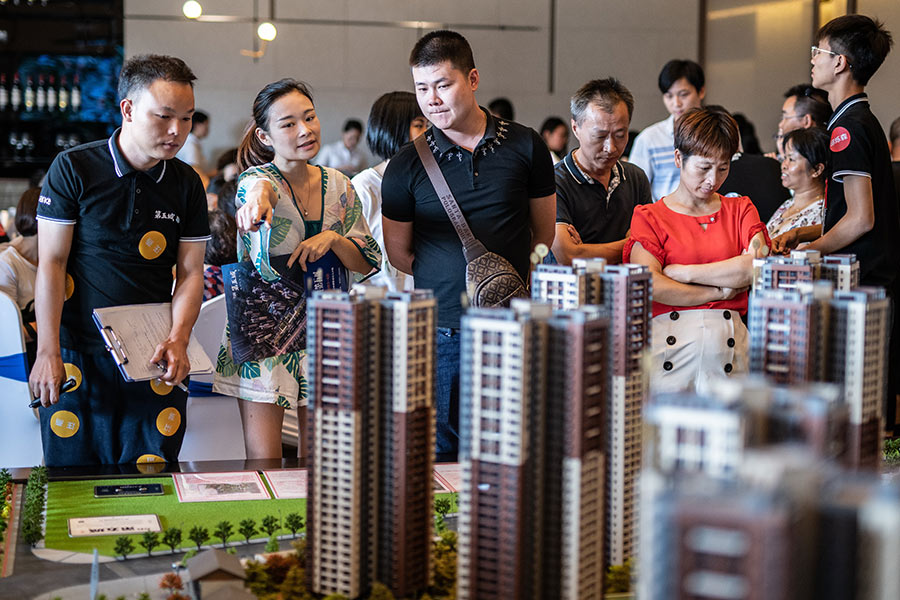 Visitors learn about a housing project at the sales center of a property developer in Dongguan, Guangdong province, on Oct 2. [Photo by An Dong/for China Daily]

According to data issued by the National Bureau of Statistics on Saturday, in September the price of newly built commercial property remained stable for the second month in a row. Shanghai and Shenzhen both witnessed price drops in new property sales of 0.1 percent and 0.2 percent respectively, compared to August. Meanwhile, the average price in Guangzhou grew by 0.4 percent from the previous month.

Among the 70 monitored cities on the Chinese mainland, Shanghai, Shenzhen and Jinhua, a city in Zhejiang province, experienced house price drops in September.

"Compared to August, the average price of new houses in first-tier cities dropped by 0.1 percent, while in August the average price showed a 0.3 percent monthly increase," said Liu Jianwei, a senior statistician at the NBS.

"The government at all levels will continue to regulate the market in order to ensure its healthy development."

House prices continued to grow in lower-tier cities, but at a slower pace, as Liu observed a 0.2 percentage point decrease in the growth rate in second-tier cities' new commercial property.

"The average price in the 70 monitored cities increased by 1 percent in September from the previous month, while the growth rate in August and July was 1.49 percent and 1.2 percent," said Xie Yifeng, president of the Realty Association of Asia-Pacific Cities. "Property prices are still rising at a relatively slower pace."

"Despite the fact that most cities are still witnessing growth in house prices, signs of stabilization already exist, particularly in cities with the strictest regulations such as Beijing, Shanghai, Shenzhen, Hangzhou and Nanjing. There are a clear signs of a price drop," said Zhang.

He predicted that property supply would soon exceed demand in those cities.

"By the end of this September, the property price has seen an uptick for 40 months in a roll, the longest period in the history of China's real estate market," Zhang added.

"However, the market did not overheat in September, the traditional peak season. On the contrary, it has shown signs of stabilization."

From NBS data, cities in western China saw a dramatic increase in the property prices in September－6.2 percent for new housing in Xi'an, capital of Shaanxi province; 2.8 percent in Hohhot, capital of the Inner Mongolia autonomous region; and 2.6 percent in Luzhou, Sichuan province.

"Housing sales declined in eastern and northeastern China, while the western region was the only one where sales increased," Zhang said, explaining that destocking of property was almost complete in the western region, which had driven demand among speculative buyers.