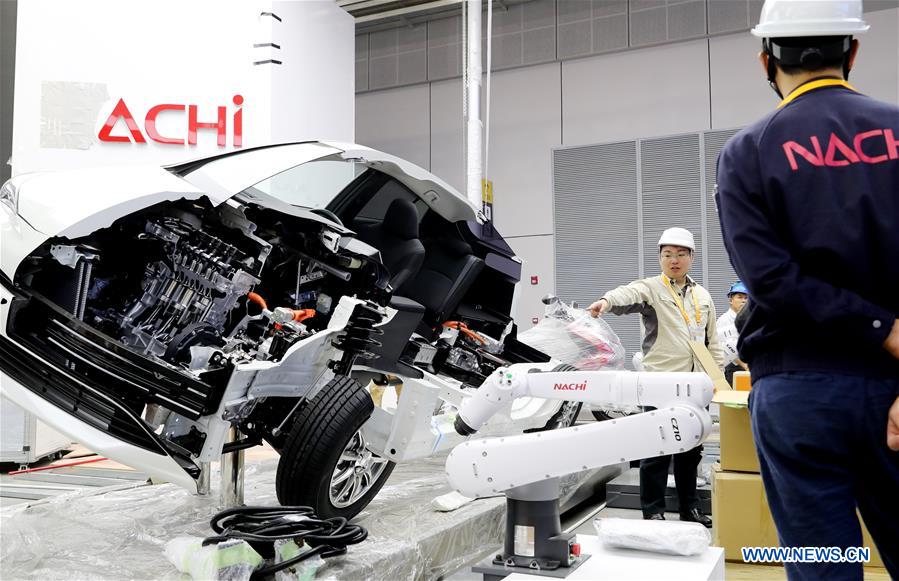 A technician guides the installation of exhibits at an exhibition hall in the National Exhibition and Convention Center (Shanghai) in Shanghai, east China, on Oct. 30, 2018. The final work is underway to get all eight exhibition halls ready for the first China International Import Expo (CIIE), scheduled to be held from Nov. 5 to 10. (Xinhua/Fang Zhe)

China's landmark import expo comes as the government moves to open domestic markets wider globally in the year marking the 40th anniversary of the reform and opening-up policy.

Instead of seeing imports as a threat to the domestic economy, analysts believe increasing quality products from overseas will help satisfy a bigger appetite from domestic buyers and serve as a catalyst for faster industrial transformation.

"The market supply will be enriched, and the prices will be more wallet-friendly for Chinese consumers," said Liu Shangxi, head of the Chinese Academy of Fiscal Sciences.

China has impressed the world with its rising consumption power, which largely stems from a rapidly growing middle-class.

Wooed by an ever-growing Chinese market, more than 3,000 companies from over 130 countries and regions plan to bring their new products and technologies to the CIIE, including Italian helicopters and German machine tools.

Many products at the expo will enjoy lower import tax rates, as a total of 1,585 tariff lines, including electromechanical and textile products, started seeing lower levies on Thursday, down from 9.8 percent to 7.5 percent on average.

This latest round of tariff reduction is expected to boost imports to China.

Zhao Ping with the China Council for the Promotion of International Trade said the increase in foreign products would intensify competition, see upgrades in domestic industries and push Chinese companies to move up the global value chain.

Automakers are among the first batch of domestic players that will more directly face global counterparts, as new tariffs for vehicles and auto parts came into effect on July 1, with rates lower than the average of other developing economies.

A wide range of other industries from food to fashion will also experience this no-pain-no-gain process.

The import-triggered industrial upgrades are in line with China's new development concepts and the drive to high-quality growth, and efforts have been taken to motivate companies to innovate and improve their competitiveness, including tax breaks and easier loans.

By expanding imports, China will share the benefits derived from its development model with other parts of the world and achieve common growth, according to analysts.

Chinese authorities expect the country will import goods worth 24 trillion U.S. dollars in the next 15 years.

BACK TO TOP
Edition:
Chinese | BIG5 | Deutsch
Link:
About CE.cn | About the Economic Daily | Contact us
Copyright 2003-2015 China Economic Net. All right reserved
Challenge or catalyst? What increased imports mean for China's economy
Source:Xinhua | 2018-11-02 17:25
Share to
0