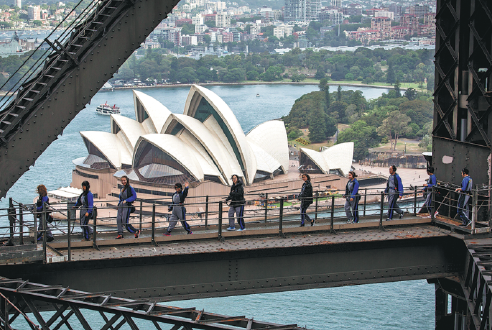 With the middle class having more money to spend, outbound travel is driving growth in the region

The young Chinese couple had just parked their rented camper van in the main street of Sheffield in the southern Australian state of Tasmania.

A cafe offered a warm, welcome respite from the harsh wind outside and a temperature of 5 C.

The couple from Beijing had earlier flown to Launceston, in the north of the state, from Sydney-a journey of about an hour and a half.

After collecting their bags, they set off across the state in the camper van, staying for a day or two in places that took their fancy.

They represent the new breed of Chinese tourist-avoiding organized group tours and preferring instead to do their own thing.

The Asia-Pacific region has been the main beneficiary of the surge in the number of Chinese traveling abroad, a result of the country's economic growth in the past two decades.

From 2007 to last year, annual per capita GDP rose from $2,650 to $8,670, pushing China into the ranks of the world's upper middle-income countries, according to global consultancy IHS Markit.

Last year alone, Chinese accounted for 143 million international tourist trips, according to the UN World Tourism Organization. In 2000, the number was just 10 million.

China's international tourism boom is having a significant economic impact on the Asia-Pacific region, driving rapid growth in the tourism economies of many countries including Thailand and Japan, Biswas said.

Leon Perera, CEO of regional company Spire Research and Consulting, said, "Chinese outbound tourism, like its Japanese counterpart a generation ago, has had a transformative effect on Southeast Asia's tourism industry.

"The inflow has sparked investment in capacity-building among the region's tourist locations," Perera said. "Going forward, the number of Chinese tourists can be expected to moderate as economic growth slows."

Perera said Chinese tourists visiting Southeast Asia tend to spend less per capita than their Western counterparts, but spending power is disparate, calling for different strategies for the mass market and premium sectors.

"At the same time, Southeast Asia's tourism industry has to moderate the possibility of overdependence on tourists from any one source country," he said.

Biswas, from IHS, said Chinese tourism in Thailand has gained considerable momentum following the release of the 2012 Chinese comedy movie Lost in Thailand.

In 2011, about 1.7 million Chinese visited Thailand, compared with 9.8 million last year, which represented 27.7 percent of all international tourism arrivals to the country.

With spending by international tourists in Thailand reaching an estimated $56 billion last year, "tourism has become a key segment of the overall Thai economy", Biswas said.

"Given total Thai gross domestic product in 2017 was $455 billion, this highlights the important role of international tourism in the overall economy," he said.

According to Biswas, the contribution of Chinese tourism to Thailand last year was estimated at $16 billion.