Government authorities, alongside experts from home and abroad, are calling for more international cooperation to promote the sustainable development of online public services and governance at the fifth World Internet Conference in Wuzhen, Zhejiang province.

The development of information and communication technologies has influenced every dimension of society, including the way the government interacts with citizens. The advent of electronic governance has advanced management reform.

At 11 am on Oct 1, the Safe Beijing Sina Weibo micro-blog account advised its 12.5 million followers to be careful about the driving routes they selected since the weeklong National Day holiday would see millions of travelers from all over the country pour into Beijing, and tourist attractions and surrounding areas would likely be clogged with severe traffic congestion.

The posts were forwarded and commented on by the account's followers. One post - in response to an incident at a Beijing shopping mall in which three women snatched a baby from his stroller - was forwarded over 290,000 times.

Online-governance services like Safe Beijing seek to increase the use of internet technologies to promote interaction among officials, citizens and businesses, and increase social services' availability, transparency and efficiency.

Internet Plus governance was, for the first time, included in the government work report of the 2015 two sessions - the annual meeting of the country's top legislature and advisory body, the National People's Congress and the Chinese People's Political Consultative Conference.

The State Council, China's Cabinet, then issued a guideline to promote the initiative and improve government services' quality and efficiency.

Government bodies at all levels across the country have opened a total of more than 170,000 accounts on Sina Weibo, over 500,000 on WeChat and about 20,000 portals to improve administration, Xinhua News Agency reported in June.

"Using online tools to facilitate public services is an important step to accelerate governance reform, since the internet is the fastest and most convenient way for the government to interact with, and provide services for, the public."

E-governance is not only crucial to streamlining administration, strengthening supervision and optimizing services but is also important for transforming government functions, improving efficiency and transparency, and stimulating market vitality and social creativity, Fang says.

It's not limited to government organs in the more-developed cities, such as Beijing, Shanghai and Shenzhen, but has also been growing in popularity in other parts of China in recent years.

The government of Karamay in the Xinjiang Uygur autonomous region has developed its e-governance initiative since 2013, focused on informing citizens and promoting interaction.

The portal enables residents to find the information they need online rather than actually visit government offices.

"For example, if a patient needs an emergency blood transfusion, medical staff can use the platform to quickly find a donor with the right blood type and rapidly reach that volunteer."

The platform also monitors such data as water, electricity and gas that's closely related to residents' daily lives, which enables the government to better care for the elderly. Community authorities visit retirees' homes if there are any abnormalities to make sure they're safe, Ye says.

China had 802 million internet users and 470 million online-government-service users as of June, the China Internet Network Information Center reports. That's about 60 percent of all internet users in the country.

While traditional e-governance applications have been infused into people's daily lives, government departments have started to use the latest social-networking services, such as Douyin, known as Tik Tok overseas, to reach wider audiences and expand services.

Douyin was founded as a streaming service for music, gaming and dance videos in September 2016.

Its popularity has skyrocketed since it diversified its content to include gourmet food, exercise, travel and culture.

It attracted more than 150 million active daily users and 300 million a month between January and June. Over 40 percent were aged 24 to 30, the company says.

Douyin's surging growth has encouraged more than 2,800 government departments and media organizations, including the State-owned Assets Supervision and Administration Commission and People.cn, to open accounts, according to the company's report in August. 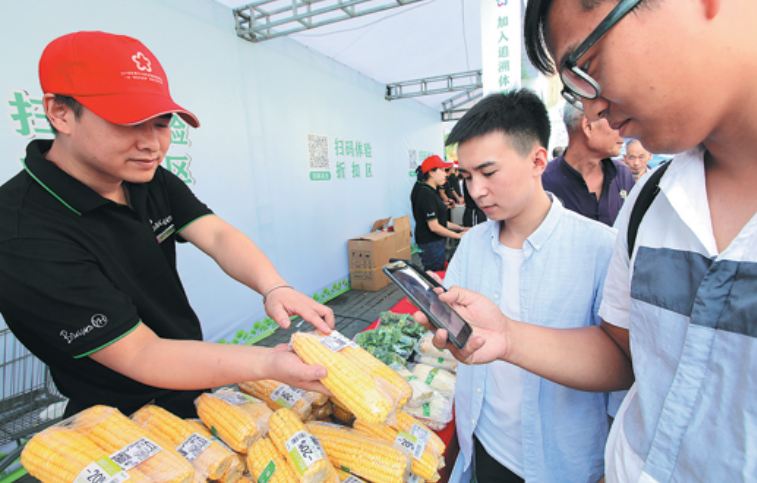 Citizens use their mobile phones to scan QR codes and trace the source of meat and vegetables in Xi'an, Shaanxi province. [Photo by Ma Zhao/For China Daily]

Shaanxi province's capital, Xi'an, has come to be known as Douyin's "celebrity city" because of the number of videos created there that have gone viral. The platform says its more than 610,000 short videos about the city had been watched more than 3.6 billion times by the end of April.

Government-related Douyin accounts posted 100,000 videos that received more than 50 billion hits in the first nine months of the year, according to Beijing Byte-Dance Technology, a news and information-content provider.

"The government has kept pace with every new internet product, and every new media platform has enabled it to build a more approachable and interactive image," Zhu says.

"Many social issues have been resolved thanks to public exposure on internet platforms. People have places to comment, and the government hears their voices."

The 2018 United Nations E-Government Survey ranked China 34th among 193 countries and regions around the world in terms of the availability of online services in e-governance.

China can learn from the top 10 countries, including neighbors, the Republic of Korea and Japan, Zhu says.

Exploring new communication modes should be encouraged. But government departments should ultimately plan for long-term operations and not open accounts because of peer pressure or as vanity projects, Zhu adds.

BACK TO TOP
Edition:
Chinese | BIG5 | Deutsch
Link:
About CE.cn | About the Economic Daily | Contact us
Copyright 2003-2015 China Economic Net. All right reserved
E-governance continues to advance with innovation
Source:China Daily | 2018-11-09 11:16
Share to
0