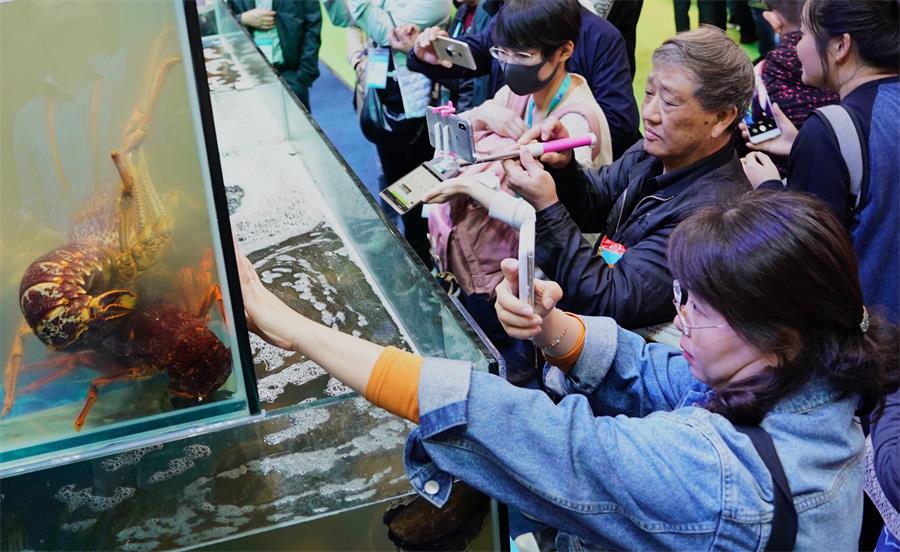 Lobsters are displayed at the China International Import Expo in Shanghai on Friday. BI XIAOYANG / XINHUA

The increasingly prosperous population of Chinese consumers living in smaller cities has driven a deal-making boom at the first China International Import Expo in Shanghai.

Homegrown companies' purchases of imported goods were fueled by the strong appetite of smaller cities. These markets, according to the estimation of investment bank Morgan Stanley, will create a $9.7 trillion consumption market by 2030.

During the CIIE, which ends on Saturday, Sun Lin, a director of Guizhou Heli Business and Investment Group, led a team to search for new products for the retailer's 80 supermarkets located in Guiyang, Guizhou province in Southwest China.

In a single day, Sun purchased about 30 million yuan ($4.3 million) worth of commodities, including milk powder, edible oil and cereals from Australia, and peanut butter originating in the United Kingdom.

"These new products will be available to citizens in Guiyang by the end of this year," Sun said, adding that local consumers have upgraded their demand for daily necessities.

"The national-level import expo makes it convenient for us to select and purchase high-quality goods and services worldwide," Sun said.

For consumers in East China's Fujian province, a new type of anti-cancer medicine will be available soon. Feng Ling, general manager of Guanhua Medical Corp, said it will be the first time that Fujian companies introduce foreign medicine to the local market, and purchases are expected to reach $29 million annually.

According to Morgan Stanley, lower-tier cities make up 59 percent of China's nominal GDP.

The spending power of consumers in these cities has been revving up. For example, in the second quarter, the Consumer Confidence Index ― which partly measures the willingness to spend ― climbed to 116 points in third-tier cities, from 112 in the previous quarter, according to Nielsen, a global performance management company.

Nielsen said it was the most significant growth among all cities. In comparison, the index in first-tier cities remained stable at 111.

Maeck Can Yue, founder of Miji, a Germany-based manufacturer of cooking appliances and systems, said Chinese consumers living in lower-tier cities, like those in bigger cities, show a tendency to pursue a quality lifestyle. The company will start to sell some of the new products exhibited at the CIIE on Sunday, she said.

Ocean King, an Australian manufacturer of nutrients and skin care and honey products, made its Chinese debut at the expo and hopes to tap the huge consumption potential of third-tier and lower-tier cities.

"Major international brands have already made a strong presence in major cities like Beijing and Shanghai, making it difficult for us to penetrate as a latecomer," said company director William Ma.

Shi Jing and He Wei contributed to this story.