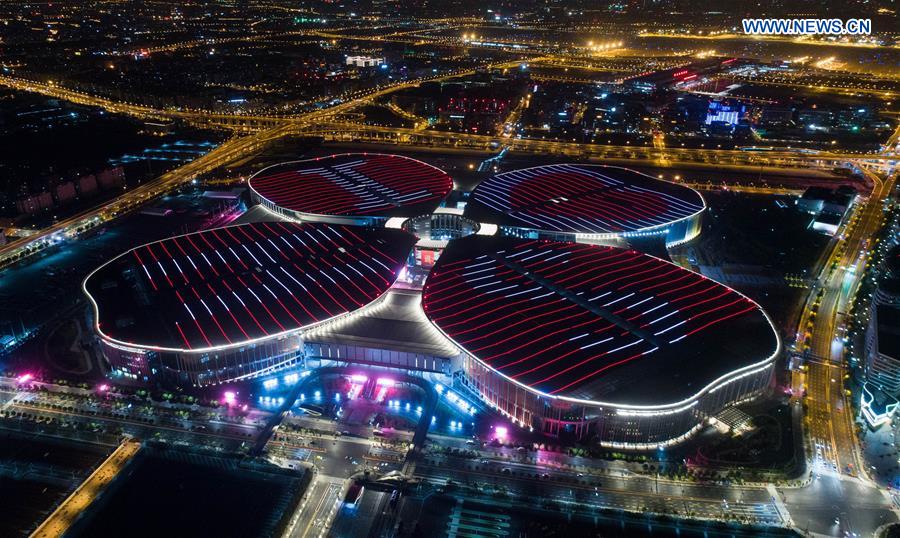 When put under the lens of history, the China International Import Expo (CIIE) that concluded in Shanghai Saturday might be a milestone amid China's transition from an export powerhouse to an import nation.

What the country imported during the past 40 years has changed the lifestyles of many Chinese. What the Chinese consumed, in turn, has reinvented what the world competes to offer.

A selection of Xinhua photos captures the unique moments in China's long history of opening to the world.

A 1978 Japanese documentary, China's New Look, featured a scene that said everything about what the Chinese craved back then. In front of an old-fashioned television set, dozens Shanghainese gathered around to watch a TV show.

In 1981, only one out of every 170 urban households in China had a color television. Having a TV set at home was something worth boasting about, especially when a man would propose.

As China started to open its doors to foreign manufacturers, a TV, a refrigerator and a washing machine became a "must-have" home appliances set for a typical middle-class family.

"With more electronics products available, color televisions, cassette recorders, stereo components, record players and electronic games and toys, which were only a dream just a decade ago, can now be found in millions of Chinese homes," read a Xinhua story in 1987.

In October 1990, the first outlet of McDonald's on the Chinese mainland opened for business in Shenzhen, a southern city at the forefront of China's opening-up.

The western fast-food chain quickly became the hottest tourist spot in town. Curious Chinese consumers lined up in front of the 20 cashiers of the three-story building, shouting to the staff "I want 10 big macs," recalled a trainee with McDonald's at that time.

A meal at McDonald's was never so fast. China's new rich would line up at the fancy western restaurant for two hours to chat with friends, discuss businesses or even have a date.

While McDonald's stood for fashion, a Volkswagen's Santana car was a symbol for status. As many Chinese once said, somewhat jokingly: "As long as you have a Santana, you have nothing to fear driving all around the world."

The German automaker set up its first joint venture (JV) with SAIC Motor in Shanghai in 1985. By the end of 1991, the JV produced more than 100,000 Santana cars in total.

Following the success, Volkswagen has been expanding its footprint in China, with the establishment of a second venture, FAW Volkswagen, in northeastern city of Changchun in 1991, and a third in Hefei, eastern Anhui Province, in 2017.

For many Chinese, the year 2001 was pretty unforgettable. The year marked the start of a new millennium and led to a whole new era as China joined the World Trade Organization (WTO).

From 2001 to 2017, China's average growth of imports in commodities and services was more than twice the world's average.

Looking back, joining the WTO was one of the hardest decisions this country had made over the years. Back then, many feared it would destroy China's domestic market, saying that "the wolf was coming" because other countries might manufacture better.

But China never paused to open its market wider in fear of competition. In the spring of 2007, the 101st session of Canton Fair, China's oldest trade fair, set up a new section for imports -- a signal that imports are no longer a "side dish" at China's trade events.

"When you take the challenge and change yourself, that is the opportunity," Ma said.

Shanghai, a city of long-time commercial culture, is always a step ahead in China's foreign trade.

In 2013, China established its first pilot Free Trade Zone (FTZ) in Shanghai's Pudong New Area and expanded to a larger area in Pudong in 2015. It was announced on Nov. 5, the day the CIIE opened, that the Shanghai FTZ would expand further.

Preferential policies in the FTZ, including the negative list for foreign investment and the cross-border renminbi capital pool policy, effectively boosted the development of many multinational companies.

The Shanghai FTZ published the country's first negative list with items that were off-limits for foreign investment, which has been rolled out across the country.

In 2010, the city hosted the 2010 World Expo, a milestone that showcased China's sincere wish to open to the world.

The Shanghai World Expo, the first held in a developing country in the event's 159-year history, set a record in terms of the number of participating countries or regions, the size of the Expo park and the number of visitors.

With the successful hosting of China's first import expo, the city continued to drive China's import agenda. As China pledged further opening-up, this gathering will be remembered as a new beginning for China's import history.