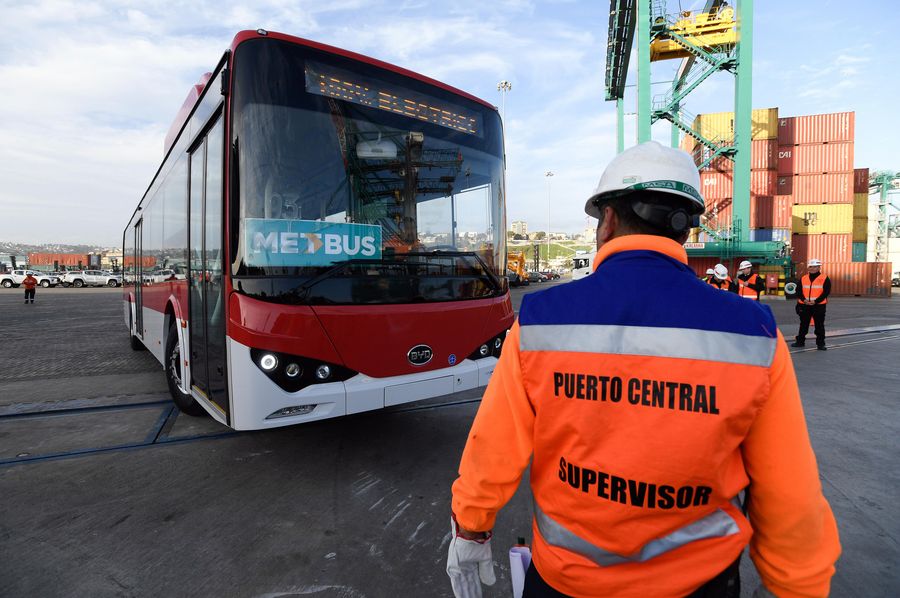 An electric bus, manufactured by Chinese company BYD, arrives in the port of San Antonio, in the region of Valparaiso, Chile, July 31, 2019. (Xinhua/Jorge Villegas)

"What mattered most to us was the evaluation of the passengers, which was excellent," said Hutt, noting that the commuters gave the Chinese buses an average 6.3 rating on a scale of 1-7, which surpassed Santiago's subway, the capital's former best-rated mass transit system.

The red-and-white fleet is 100 percent electric, air-conditioned, and equipped with Wi-Fi and USB ports.

Passengers "have really taken good care of them ... they feel the journey is much better," said Hutt, noting the lack of scratches and graffiti.

The fleet's operating costs are "significantly lower" than the ones powered by conventional fuel, which is expected to spur other bus operators to turn to electric vehicles. The batch also contributes to the government's environmental goals, said the minister.

Each bus can cover 260 km with a 3-hour full charge, which is enough for a full day's operation.

To accommodate the fleet's charging capacity, the city is updating bus terminals with higher technological features such as better charging stations, according to Hutt.

A corridor in Santiago has started installing these charging stations, said Hutt, nothing that the ministry plans to install a similar corridor in each of Chile's regional capitals.

Another 183 Chinese buses are due to begin operating in October, and the ministry is in talks to purchase 60 more.

Such measures are part of the city's forward-looking Metropolitan Mobility Network, which comprises electronic buses, subways, suburban trains and a bike-sharing scheme.

The private sector in China and Chile is increasingly interested in electric mobility in Chile, which Hutt called a "gain" for the government. "More and more new brands are arriving, so we have a greater range of supply."

BACK TO TOP
Edition:
Chinese | BIG5 | Deutsch
Link:
About CE.cn | About the Economic Daily | Contact us
Copyright 2003-2015 China Economic Net. All right reserved
How Chinese electric buses are transforming commutes in Chile
Source:Xinhua | 2019-08-05 06:58
Share to
0