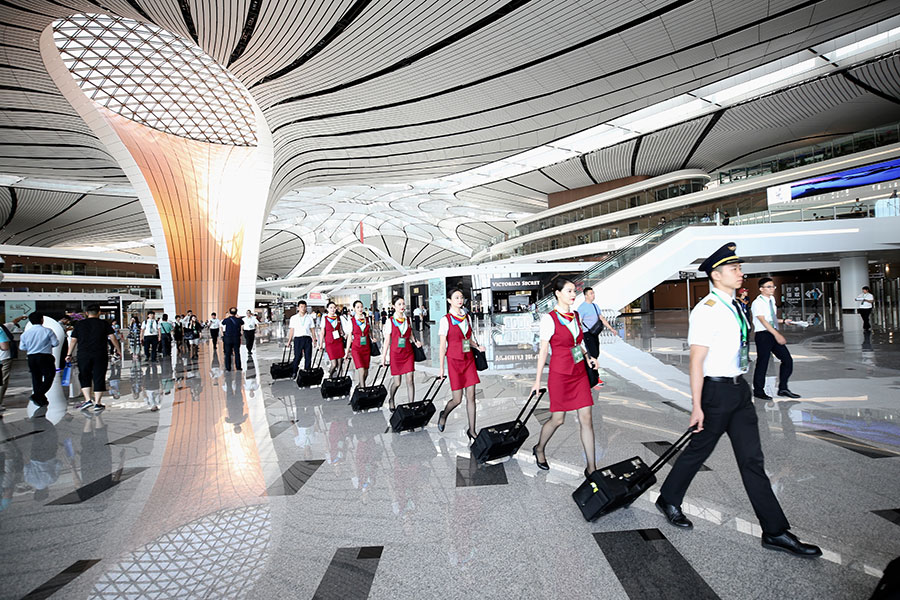 Beijing Daxing International Airport completed its largest official comprehensive test on Friday, marking steady progress toward the start of commercial operations by the end of September.

The Civil Aviation Administration of China is expected to issue an operating license soon, signaling that the facility will be qualified to handle flights. Licensing is based on a six-month evaluation.

Starting at 9 am, nearly 9,000 volunteers carried 5,600 pieces of luggage through the security and boarding processes on the third and fourth floors of the airport's departure hall.

Other passengers dropped off their checked baggage at Caoqiao subway station for transfer to flights for the first time. Four check-in counters opened at the station at around 8:30 am, including one to test international flights and three for domestic ones.

Automated trains, running from Caoqiao station in downtown Beijing to the new airport, were also put into operation. The trains, each with seven passenger cars and one for luggage, are scheduled to run every 8.5 minutes.

"It helps the airport assess its operational readiness and fix possible problems," he said.

Since transferring terminal operations to the property owner in mid-July, Li said he was greatly relieved to see the facility's construction move forward.

"I spent four years building the airport and I am lucky to be a part of the whole process and watch the world's largest seamless steel structure airport terminal building come together," he said.

The tests also included scenarios involving security system failures and the operations of several restaurants, cafes and retail venues, a news release from the airport said.

Blue Frog Bar and Grill, a Western chain in China, opened its first airport dining area in the new facility.

Restaurant manager Xie Ruian said the menu was simplified down to six choices to cater to the urgent needs of airport passengers.

"Preparation times will be shortened to 15 minutes for each dish," he said, adding that the restaurant also offers several drinks tailored to foreign travelers' tastes.

China Eastern Airlines, which will become a major airline service operator at the airport, put 5G technology to work on Friday during the test run. Facial recognition technology at check-in and a VIP lounge also caught many volunteers' eyes.

Four smaller tests were carried out at the airport in July and August to ensure smooth and efficient operations when it officially comes online.

Construction of the airport was completed on June 30.