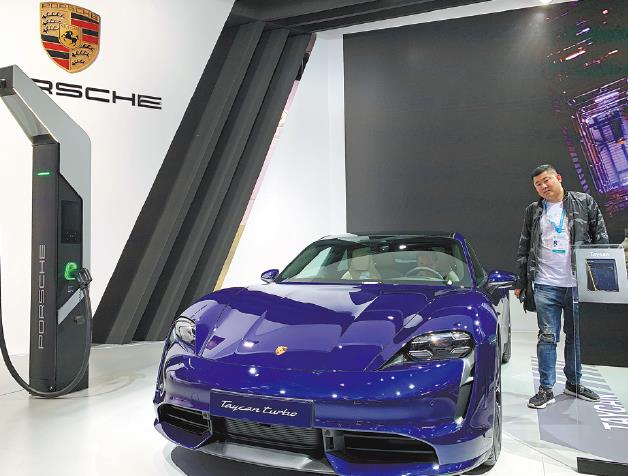 The Taycan, an electric sports car from Porsche, and its charging pole are displayed at the second China International Import Expo in Shanghai. [Photo by Zhang Dandan/China Daily]

The industry for electric vehicle charging infrastructure in China is undergoing a period of growth with construction quickly trying to make up for a gap in supply. Yet insiders said the current problems can only be properly solved by an all-around advancement of the new electric vehicle industry.

Statistics from China Electric Vehicle Charging Technology and Industry Alliance revealed that by March this year, there were 1.27 million charging poles in China, of which 542,000 are public and 725,000 are private.

The construction of private charging poles is far less than expected, according to insiders.

According to a development plan for the NEV industry released by the Ministry of Industry and Information Technology last year, China's NEV sales will account for 25 percent of total car sales in 2025.

If this is the case, it means that the country's charging infrastructure will be in serious short supply.

To cope, China is poised to step up the construction of charging infrastructure, with a total investment of 10 billion yuan ($1.41 billion) being invested this year to establish 200,000 public charging poles, 400,000 private charging poles and 48,000 public charging stations, said Cai Ronghua, a senior official of the National Development and Reform Commission, at a news conference on April 9.

Sun Guangqi, director of the economic construction department of the finance ministry, said at the event the ministry will work on optimizing incentive and subsidy policies for the construction of charging facilities, to further mobilize industry initiatives, turn the situation of more cars and less charging poles around and create a good environment for the consumption of NEVs.

Industry insiders said that user anxiety concerning the range of electric cars has shifted toward the convenience of charging.

However, the individual-end market has not yet been truly opened, reported China Energy News.

In the future, NEVs will mainly be private cars, and there is a huge market capacity for private charging, Gao said, adding Star Charge is set to announce a three-year investment plan of 3 billion yuan. 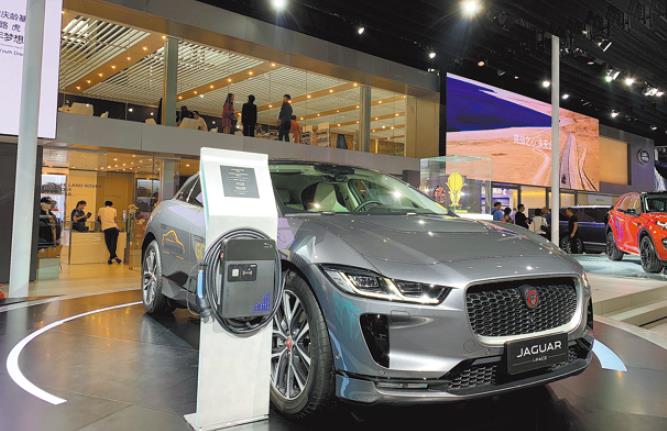 Jaguar showcases its electric model I-Pace with its charging pole at the 2018 Guangzhou auto show. [Photo by Zhang Dandan/China Daily]

On April 14, State Grid announced plans to invest 2.7 billion yuan to add 78,000 charging poles in 24 provinces and municipalities across the country this year.

China Southern Power Grid said that it will invest 25.1 billion yuan in the following four years through investment and acquisition to build 150 large-scale charging stations and 380,000 charging poles, which are more than 10 times the existing quantity.

"The increased investment made by China's State Grid and Southern Power Grid will help raise the whole society's awareness of the convenience of charging electric cars and benefit the whole industry chain," Gao said.

Li Lili, a researcher at Tsinghua Sichuan Energy Internet Research Institute, said that some bottlenecks need to be solved to better serve the whole industry chain.

They include addressing the difficulty for charging operators to make profit, difficulty in installing charging poles in residential areas and poor charging experience with public charging facilities.

"The construction of charging facilities should be carried out in a targeted manner, taking different fields into account," Li said.

The government has made a big push to replace gasoline-fueled buses, taxis and sanitation vehicles with NEVs.

As a consequence, charging poles for these vehicles will have substantial growth, the construction of which asks for concerted collaboration with the government.

Close attention should also be paid to the surplus of charging poles in some areas, Li noted. Local governments should reinforce its industry plans and investment guidance in an attempt to allow the investment to flow to areas with inadequate charging facilities, and avoid idle and ineffective investment.