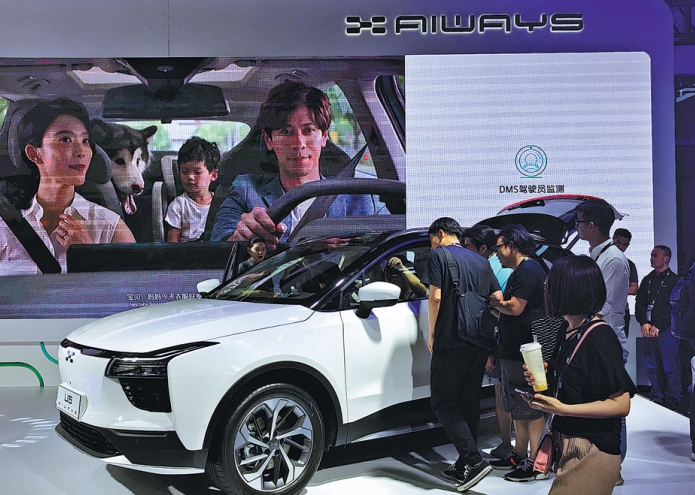 China is planning to further stimulate the new energy vehicle sector－in terms of their demand, supply and use－and is confident in its long-term prospects, said a senior official at the Ministry of Industry and Information Technology, which supervises the automotive industry.

Miao Wei, minister of industry and information technology, made the remarks on Tuesday at the sidelines of the annual session of the National People's Congress, the country's top legislature, which concluded on Thursday.

Both gasoline and new energy vehicle sales have been gravely hit by the COVID-19 pandemic. In response, the government has come up with a number of measures including the decision to extend subsidies by two years to the end of 2022, said Miao.

The overall vehicle market saw a 4.4 percent rise in April from the same month in 2019, but the sector of electric cars and plug-in hybrids has not recovered.

Miao added: "But their production capacity has basically recovered to the level of last year. We are confident in the sector's prospects."

He said the government will relax the limit on production outsourcing and allow capable carmakers to test products themselves to cut unnecessary and repetitive procedures.

Nio is producing its vehicles at a plant it built with JAC Motors. Also, vehicles of Xpeng, which has recently received the license to built its own plant in Guangdong province, once rolled off Haima's assembly line.

Analysts say outsourcing production makes it easier and cheaper for startups to produce cars and allow established carmakers to make better use of their factories. After all, building a car plant takes years and costs billions of yuan.

Nio and BJEV are building vehicles with swappable batteries, which can replace their empty batteries for fully-charged ones in minutes.

Batteries, which account for roughly half of an electric car's cost, have seen rapid progress in recent years as companies try their best to extend driving ranges.

Nio said it has built 125 battery swapping stations in 53 cities across China. More than 400,000 of its batteries have been swapped so far. The company said it will build more stations this year.

"With swappable batteries, electric cars have now taken another step forward to challenge the dominance of gasoline vehicles," Nio said.

BJEV, the country's largest electric car maker, was the first to see the large-scale commercialized use of battery swap stations, which mainly serve cars used as electric taxies. By the end of 2019, it had more than 16,000 electric vehicles capable of swapping batteries across 15 cities. These included Beijing, Xiamen in Fujian province and Lanzhou in Gansu province.

Late last year, the company said it will invest more than 10 billion yuan ($1.4 billion) in building 3,000 battery swap stations by the end of 2022. They would be capable of serving 500,000 electric vehicles.

Statistics from China Electric Vehicle Charging Technology and Industry Alliance revealed there were 1.27 million charging piles in China by March 2020; about one charging pole for every three vehicles.

"In a word, we are concerned with the sector's development and will offer a better environment so that more people will choose new energy vehicles," Miao said.