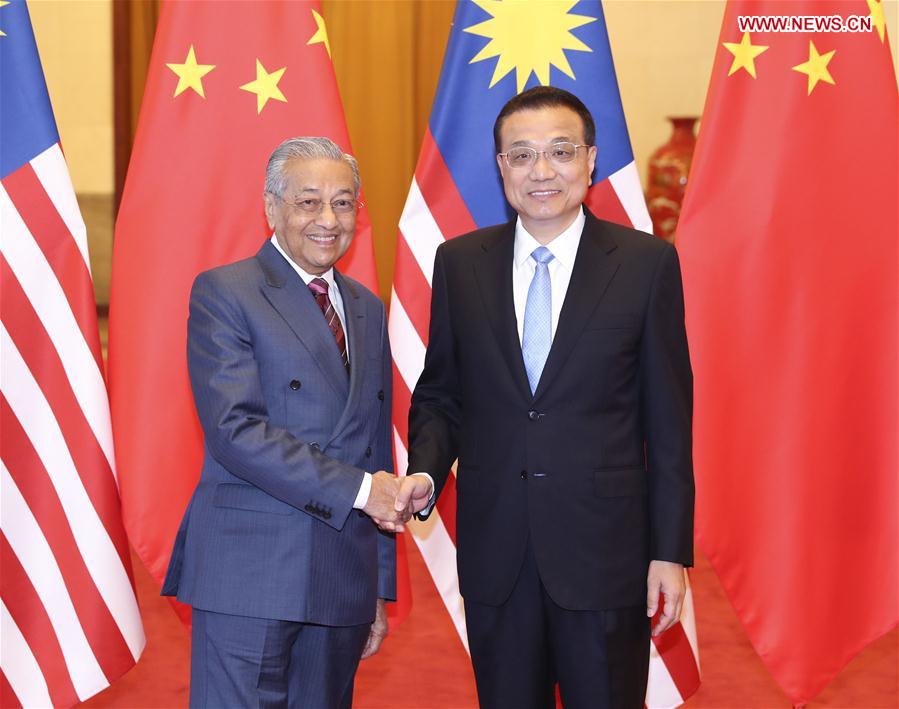 With new governments established in the two countries this year, the development of bilateral relations was standing at a new starting point, Li said.

He said that China will follow the friendly policy towards Malaysia, and will work with Malaysia to score the long-term healthy development of bilateral ties on the basis of mutual respect, equality, and mutual benefit.

He said China will import more high-quality Malaysian products to cater to the needs of domestic consumers, improve the level of trade facilitation, and encourage strong and reputable companies of the two countries to expand two-way investment.

Li called on the two countries to provide a stable and sound business environment.

"China is willing to explore new cooperation with Malaysia in the fields such as science and technology innovation, automobile, finance, and e-commerce," said Li.

He also stressed the need to promote cultural exchanges, so as to lay a solid foundation of public support for cooperation.

As Malaysia is an important member of the Association of Southeast Asian Nations (ASEAN), the development of China-Malaysia relations will not only benefit the two countries but also help deepen China-ASEAN relations and cooperation, said Li.

Against the background of rising unilateralism and protectionism, China is willing to work together with ASEAN countries including Malaysia to advocate multilateralism and free trade, adhere to putting development as a priority, and promote the building of an economic community in East Asia, so as to contribute to regional peace, stability, and prosperity, Li said.

Mahathir said that this is the first time he has visited a country outside ASEAN since he assumed office as Malaysian prime minister for the second time but his eighth visit to China as the prime minister.

He confirmed that the Malaysian government will continue to pursue the friendly policy toward China and look forward to further consolidating bilateral relations through this visit, realizing mutual benefit and win-win results in the economic and trade fields, and promoting the upgrading of Malaysia-China relations.

While calling trade protectionism a historical reversal, Mahathir said Malaysia hopes to export more products to China, welcomes investment from Chinese companies, and hopes that both sides will expand cooperation in tourism, innovation and research and development.

Malaysia actively supports the Belt and Road Initiative, which is conducive to promoting inter-connectivity and trade exchanges between countries and enhancing the links between the East and the West, he said.

A healthy and stable Malaysia-China relationship will not only benefit Malaysia but also contribute to regional peace, stability, and prosperity, he said.

When meeting the press after the talks, Li said they agreed that the two countries should be partners in trade and investment, industrial cooperation, and innovation and growth.

Li said China will work with Malaysia to build a new pattern of pragmatic cooperation and open up a new space for cooperation in the fields of e-commerce, upgrading of traditional industries, and technological innovation.

The two sides also agreed to expand two-way opening up through capacity and industrial cooperation, and promote a more balanced development of bilateral trade on the basis of expanding trade scale.

Under the current international situation, the two sides agreed to jointly safeguard free trade, oppose trade protectionism, and promote the healthy development of economic globalization, according to Li.

The two sides are committed to promoting the construction of the East Asian Community, supporting ASEAN's central position in regional cooperation, and jointly sending a positive signal to the region and the world of maintaining the long-term friendship and safeguarding regional peace, stability, and development, he added.

Mahathir said Malaysia hopes to learn from China's experience and enhance the level of e-commerce and innovation cooperation.

The two countries are willing to work together to support globalization and maintain an open, free, and fair international economic system.

Also on Monday, the two sides released a joint statement, saying that standing at new historical junctures of their respective national development, China and Malaysia are optimistic about the prospect of their bilateral relations.

The statement said that during the visit, leaders of the two countries charted the course for future development of the bilateral relations, and had in-depth exchanges of views on regional and international issues of common interest in a friendly and cordial atmosphere.

It said both countries underscored the importance of maintaining peace, security and stability, as well as safety and freedom of navigation in the South China Sea.

Both sides emphasized the need for all sovereign states directly concerned to resolve their differences by peaceful means through friendly consultations and negotiations, and the need for all parties to exercise self-restraint in the conduct of activities, and to avoid actions that would complicate or escalate tensions in the South China Sea.

China and Malaysia, together with the ASEAN Member States, will work for the full and effective implementation of the Declaration on the Conduct of Parties in the South China Sea and encourage maritime cooperation, as well as actively push forward consultations on a Code of Conduct (COC) to see early conclusion of an effective COC, the statement said.