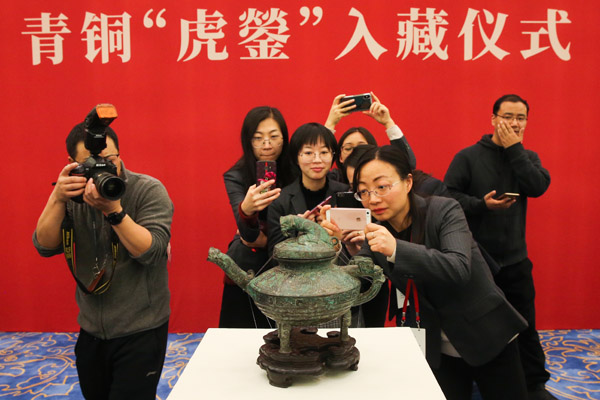 Journalists and National Museum of China employees crowd around a tiger-topped bronze relic that dates to the late Western Zhou Dynasty (c. 11th century-771 BC). The relic was returned to the museum on Tuesday after being lost abroad for more than a century. [Photo by Jiang Dong/China Daily]

A Chinese bronze vessel some 3,000 years old that was looted and taken to the United Kingdom in the 19th century, has returned to its country of origin, officials said.

It was transferred to the National Museum of China on Tuesday.

The vessel, called the Tiger Ying because the top and spout show images of tigers, is from the late period of the Western Zhou Dynasty (c. 11th century-771 BC). Before it was lost, it was housed in the Old Summer Palace, or Yuanmingyuan, a huge imperial garden complex of the Qing Dynasty (1644-1911) in northwest Beijing, along with many other royal collections of cultural relics.

"The loss and return of Chinese cultural relics is closely connected with the fall and rise of a nation," Liu Yuzhu, director of the National Cultural Heritage Administration, said on Tuesday. "The lost cultural relics hold Chinese people's deep emotions."

The Old Summer Palace was burned and looted by allied Anglo-French forces in 1860.

The Tiger Ying was grabbed by a British military officer, as shown by an letter he wrote. It had been kept by his family ever since. Its wooden, Qing Dynasty base was taken together with the bronze.

In April, the Tiger Ying appeared in an auction catalog at the Canterbury Auction Galleries in Kent in southern England, triggering expressions of anger among Chinese netizens.

Though the Chinese government strongly protested the auction and the China Association of Auctioneers called for a boycott of the event, the Tiger Ying was sold for 410,000 pounds ($517,000) on April 11 to a buyer whose identity remains unknown.

The buyer, however, indicated

Low-profile preparations for its return began in June through multiple channels. It was returned to China's custody on Sept 21 and remained in the Chinese embassy until it was moved to Beijing on Nov 23, according to a release at Tuesday's ceremony marking its move to the National Museum of China.

"Its journey back home is a milestone in our efforts to repatriate lost treasures from overseas," Liu said. "It fully shows our responsibility to protect our country's cultural heritage, and may contribute more wisdom about handling similar issues."

"Different social efforts will help bring more treasures home," he said, adding the work will be done "in good order".

Only eightyingartifacts are known to exist, according to Sun Ji, 89, a veteran archaeologist who participated in appraising the artifact.

"And no other one is so intact," he added. "The vividly portrayed tiger sculptures and exquisite patterns are also incomparable."

Sun said it was used for sacrificial rituals in the Western Zhou period. People burned liquor for the gods to "smell". The ying probably was a holder for spices that were combined with alcohol.

In 2013, two bronze animal head statues from the Old Summer Palace－the rabbit and rat from the Chinese Zodiac－were returned from France and moved to the museum. The two artifacts, part of a fountain, were also looted in 1860.