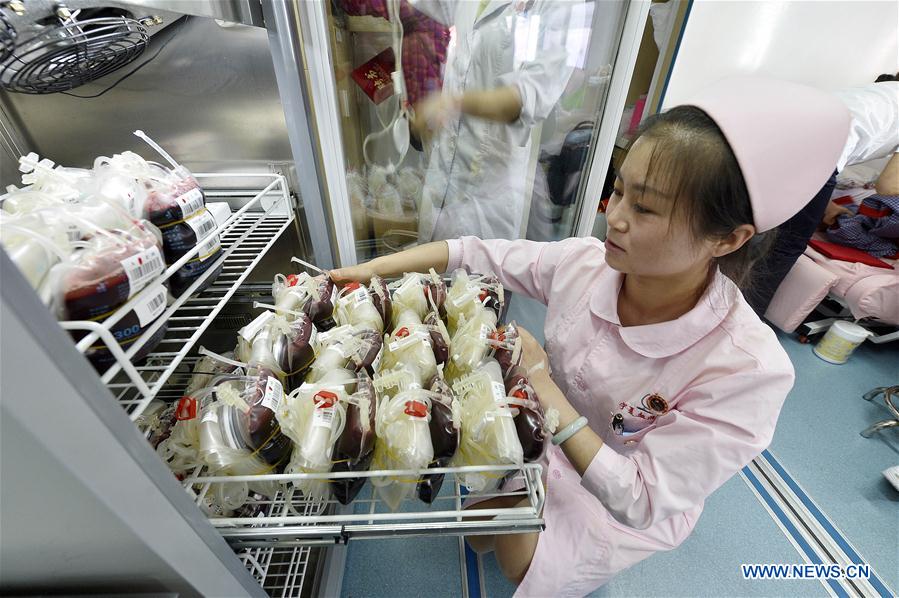 A medical worker checks donated blood at a donate center in Yinchuan, capital of northwest China's Ningxia Hui Autonomous Region, June 14, 2016. The number of blood donators in China keeps growing and registered blood donations peaked 14.59 million last year, almost 45 times the number in 1998. The country recorded nearly 6 million blood donations and 2,065 tons of donated blood from January to May this year, up 3.6 percent and 5.2 percent respectively year on year, according to the National Health Commission (NHC). "The blood for clinical use in China now entirely comes from voluntary blood donations," said Zhou Changqiang, an official with the NHC on Dec. 15, 2018. "Meanwhile, Tianjin has rolled out favorable policies to encourage such behaviors, such as waiving blood processing fees at hospitals if a donor donates more than 1,000 ml within five years." Similar policies have also been introduced in other cities across the country, such as Beijing and Shanghai. The number of voluntary blood donations has seen 20 years of consecutive growth in China, from 328,000 in 1998 to 14.59 million in 2017, figures from the NHC showed. The number of voluntary blood donors and the volume of blood collected in the country from January to November this year increased by 3 and 4 percent respectively year on year, according to Zhou with the NHC. (Xinhua/Peng Zhaozhi)