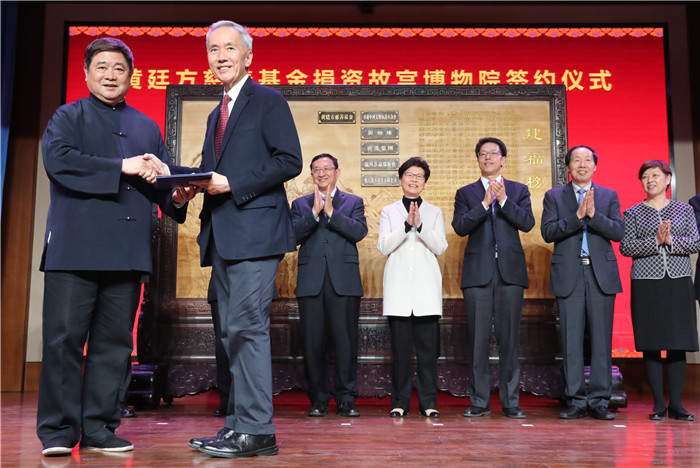 Shan Jixiang (left), director of the Palace Museum, and Ng Chee Siong, head of real estate conglomerate Sino Group, shake hands during a signing ceremony in Beijing on Saturday. It marked an agreement on Ng Teng Fong Charitable Foundation's donation to the Palace Museum that will enable it to renovate Yanxi Gong, a distinctively exotic courtyard. [JIANG DONG/CHINA DAILY]

Former concubines' residence, once damaged by fire, due for makeover

In the 720,000-square-meter Forbidden City－the former imperial palace in the heart of Beijing officially known as the Palace Museum－there is a courtyard with a distinctively exotic appearance.

The Palace of Prolonging Happiness, or Yanxi Gong, in the east of the palace complex, was used as the concubines' residence during the Ming (1368-1644) and Qing (1644-1911) dynasties. It was swallowed by fire in 1845, which almost destroyed the entire courtyard, except for its front gate.

Thanks to a 100 million yuan ($15 million) donation from the Ng Teng Fong Charitable Foundation, based in Hong Kong, the courtyard will soon be renovated.

In 1909, Empress Dowager Longyu, the de facto ruler of China, ordered the construction of an aquarium on the site, which used Western-style architecture plus Chinese patterns as decorations, in the hopes that this sign of water would prevent fire in the future.

If it had been completed, it would probably have been the first modern aquarium in China. But construction was unfinished when the Qing monarchy fell, leaving abandoned stone architecture and iron frames, which can be seen by visitors today.

Cultural relic warehouses were added in the courtyard after 1925, when the Forbidden City became a public museum.

In-depth studies will follow the donation to uncover mysteries, because no original blueprint of the aquarium has been found.

According to Shan Jixiang, director of the Palace Museum, the Yanxi Gong area will be turned into an exhibition space displaying foreign cultural relics among formal royal collections, because the place reflects Sino-foreign cultural exchanges. It is expected to open in 2020.

About 10,000 cultural relics out of the 1.86 million artifacts being housed in the Palace Museum are of foreign origin. The most important collection is 1,500 antique European clocks that were given as gifts or bought by Qing emperors.

"The Belt and Road Initiative, as advocated by our country today, is not only about infrastructure development," said Ng Chee Siong, head of real estate conglomerate Sino Group, who founded the charity foundation. "It will promote international cultural communication as well.

"As a holder of that spirit of ancient Chinese fine arts and thoughts, the Palace Museum is such a key platform to promote Chinese culture for the whole world."

Ng is the eldest son of Ng Teng Fong, the late Singaporean tycoon with a major presence in Hong Kong. The foundation has spent about 1.9 billion yuan on charity programs on healthcare, education, cultural heritage conservation and environmental protection.

Hong Kong philanthropists have long cooperated with the Palace Museum. Chan Chi-chung sponsored the reconstruction of the Palace of Established Happiness (Jianfu Gong) which was completed in 2006. The original architecture was destroyed by a fire in 1923.

Chan bestowed 100 million yuan for the ongoing renovation of the Hall of Mental Cultivation (Yangxin Dian), residence of the last eight emperors in the Forbidden City. Another entrepreneur, Hui Wing Mau, donated 80 million yuan for the same project. Hui also spent 130 million buying a lost Ming Dynasty painting and donated it to the museum in 2017.

These donations also helped to build a closer relationship between the Palace Museum and Hong Kong.

In 2017, a project was launched in West Kowloon, Hong Kong, to build a new museum for displaying collections from the Palace Museum.

According to Carrie Lam Cheng Yuet-ngor, chief executive of the Hong Kong Special Administrative Region, the project is developing smoothly. She said at Saturday's donation ceremony in Beijing that the foundation of the new museum has been completed, and the upper construction is to begin soon.

Lam revealed that part of the donation from the Ng Teng Fong Charitable Foundation will be used to train Hong Kong expertise on the restoration of cultural relics, exhibition management and preservation of ancient architecture in the Palace Museum.

She added that the new contribution will also enable Hong Kong students to participate in renovating Yanxi Gong as summer interns.

"It will pass on traditional craftsmanship to the young generation," Lam said.