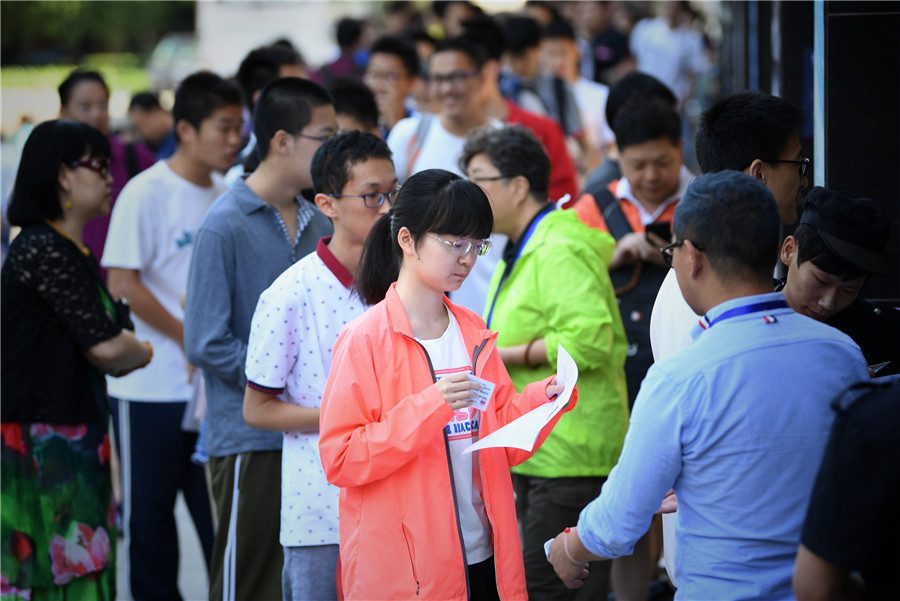 Students take an independent enrollment exam organized by Beijing's Tsinghua University in June. Those who excel get an edge to enter the prestigious university. [Photo by Hao Yi/For China Daily]

Universities in China have reduced their quotas for the independent enrollment of high school graduates.

Independent enrollment allows universities to invite students who may not qualify through the traditional route but who have other skills that make them attractive.

Wuhan University in Hubei province has reduced the quota for independent enrollment from 350 last year to 192 in 2019. Central South University in Changsha, Hunan province, reduced its quota from 420 in 2018 to 120 this year.

Universities are also cutting back on the preferential treatment of independently enrolled students.

For example, China University of Political Science and Law and the University of Science and Technology Beijing will give fewer extra points this year to students who seek to be admitted through independent enrollment.

High school graduates in China normally need to take the national college entrance examination, or gaokao, to be admitted to a university. Independent enrollment was added as an alternative admission method in 2003 to allow some key universities to enroll students based on subjective criteria.

Currently, 90 universities have allocated 5 percent of their enrollment slots to independent students with special talents. They admit more than 20,000 such students every year.

Tests of academic competence and interviews are usually required. Universities start the independent enrollment process in March, while the gaokao takes place in June.

The gaokao is a highly competitive and stressful test, and in some provinces with large numbers of high school graduates, a single point can separate more than 1,000 students. The exams create a lot of anxiety among students and parents, and some will do anything possible, even committing fraud, to be admitted to a better university.

The rise of fraud cases in recent years in independent enrollments has tainted the practice's reputation and caught the authorities' attention, with parents buying academic papers and patents online to help their children stand out.

The Ministry of Education is asking universities to adopt stricter rules for independent enrollment; to avoid too much reliance on criteria such as research papers, patents and competition results; and to limit the number of disciplines open for independent students.

Chu Zhaohui, a senior researcher at the National Institute of Education Sciences, said that instead of promoting talent and improving quality education, independent enrollment is encouraging corruption, which deprives many poor students of a fair chance to get a higher education.

The gaokao has its faults, but at least it judges all students equally, he said.

"However, independent enrollment has evolved into a situation where rich people find ways to get their children extra points. Third-party organizations should be involved in the process to make it fairer and more transparent," he said.

Xiong Bingqi, vice-president of the 21st Century Education Research Institute, said the goal of independent college admission is to establish a system of multiple evaluations, instead of judging students by test scores alone.

However, students who qualify for independent enrollment also must take the gaokao, and their scores in the exam remain an important basis for admission, Xiong said. So students and their parents are still focused on the scores.

Moreover, the pilot program has failed to help establish a two-way admission mechanism between colleges and students. Independent enrollment reform has increased the right of colleges to choose students, but students still have limited ability to seek admission to the college of their choice, as one student normally gets a call for admission from just one institution, he said.

"Universities should explore different aspects of exams, conduct comprehensive evaluations and use multiple criteria to admit students so that candidates can choose the college where they want to study," he said.