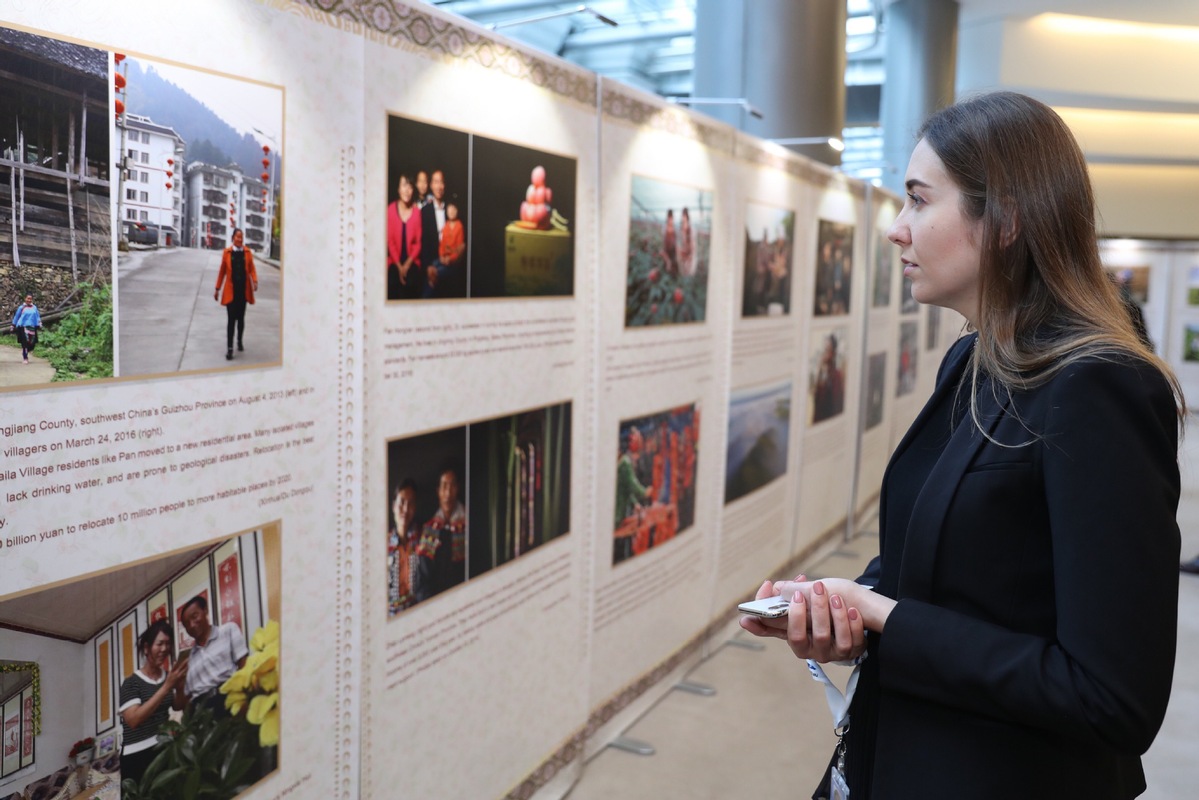 A visitor looks at photographs displayed at a photo exhibition about China's achievements in poverty reduction hosted by the European Parliament in Brussels, April 10, 2019. [Photo/Xinhua]

Wednesday was a busy day for European Union institutions, with the European Council holding an emergency summit to discuss a further Brexit extension for the United Kingdom. Still, there was time for the European Parliament in Brussels to host a photo exhibition about China's achievements in poverty reduction.

The event drew the attention of Carmen Hilario of Portugal, a political adviser to the budget committee of the European Parliament, who went to see the 40-plus photographs that highlight China's achievements in poverty alleviation in the past four decades.

"I believe that, worldwide, we are all very proud of what the Chinese people were able to do," she said. "It's an astonishing achievement that indeed has no parallel, even in the history of humankind."

She visited China for the second time last year and said the change from her first trip 10 years ago was "astonishing".

"China is to be congratulated," she said. "And it's indeed an example that if we all get together and work for it, we will be able to achieve and foster progress and growth for all humankind."

Daniela Floris, a journalism student at Vrije Universiteit Brussel who spent four years in China, described China's achievements in lifting more than 700 million people out of poverty during the past four decades as "amazing".

While in China, Floris, from Italy, traveled to Zhejiang province and said "rural areas in China are doing very well".

"The economy is booming, not only in the cities, but also in the rural areas," she said. "That is a great achievement."

Derek Vaughan, a European Parliament member from the United Kingdom who is vice-chairman of the parliament's EU-China Friendship Group, agreed.

"We should never forget that each one of those figures is a person, is a family, which becomes better off because of the policy in China," he said, referencing the numbers that show China's progress in poverty reduction. "That's why I think this exhibition is so important."

Doru-Claudian Frunzulica, from Romania, who is also a member of the European Parliament, said the exhibition, which aims to share best practices and lessons in achieving sustainable development goals, comes at a good time.

"Sustainable development goals are important for Europe and China as well," he said.

Zhang Ming, China's ambassador to the EU, said China can learn much from the EU and that they have established an urbanization partnership and are working together on rural development.

"Such cooperation should continue," Zhang said.