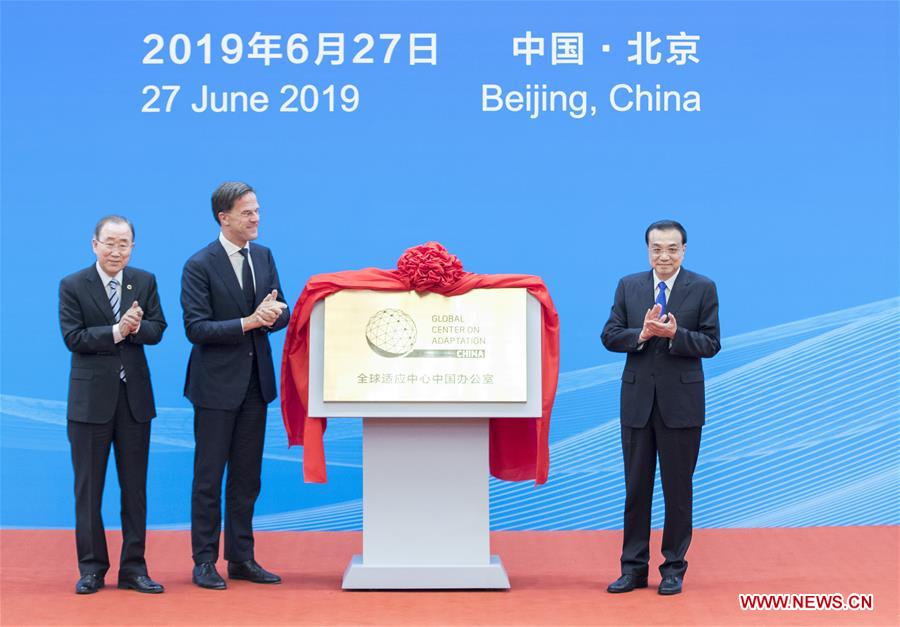 Chinese Premier Li Keqiang on Thursday called for the adherence of multilateralism and international cooperation to deal with climate change.

Li made the remarks when delivering a speech at the inaugural ceremony of the Global Center on Adaptation China Office at the Great Hall of the People after holding talks with visiting Dutch Prime Minister Mark Rutte. Rutte and former UN Secretary-General Ban Ki-moon also attended the ceremony.

The Global Center on Adaptation is the executive body of the Global Commission on Adaptation which was co-founded by 17 countries including the Netherlands and China in 2018. The commission was designed to promote the international community adapting to climate change and enhancing partnership and to help those countries that are vulnerable to climate change improve their adaption capacity.

Addressing the global challenge of climate change is not only the consensus of the international community but also the need for China's economic transformation and upgrading, said Li. "As the world's largest developing country, China has always focused on economic development while paying attention to improving people's livelihood, and continued efforts are needed for China's modernization."

"China will implement a national strategy of actively addressing the climate change in accordance with its own national conditions," said Li, adding that China will continue to shoulder due responsibility and obligation and provide other developing countries, particularly small island countries, with aid within its own capacity and under the framework of the South-South cooperation to help them improve the capacity.

The Chinese premier pointed out that developed countries should provide developing countries with financial and technological assistance to help them adapt to climate change, and jointly make unremitting efforts in implementing the Paris Agreement and accelerating the global adaptation to climate change.

Rutte said the Netherlands is ready to work with China to enhance cooperation with the Global Commission on Adaptation, facilitate experience and technology exchanges among different countries and take collaborate actions to make more efforts in addressing climate change.

Ban Ki-moon, also president of the Global Commission on Adaptation, said climate change has no national boundaries, and only through global collaboration and joint actions can the shared future world be protected.

He said the commission will continue to enhance cooperation with government, society and private sectors from countries around the world to promote a synergy to effectively address climate change and advance global sustainable development.