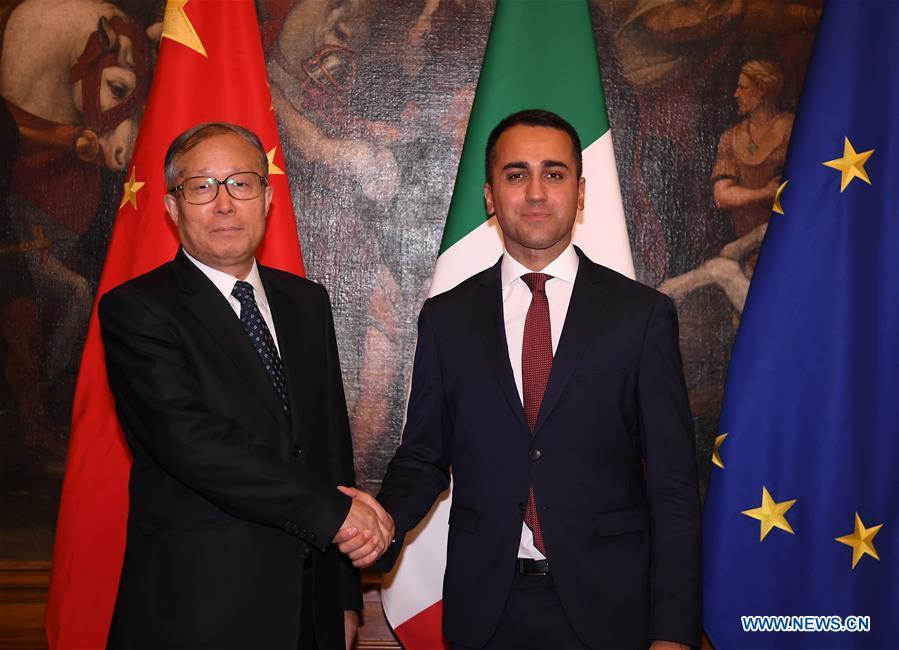 Li Hongzhong (L), a member of the Political Bureau of the Communist Party of China (CPC) Central Committee and Secretary of the CPC Tianjin Municipal Committee, meets with Luigi Di Maio, Italian deputy prime minister and economic development minister, in Rome, Italy, July 15, 2019. A delegation of the CPC headed by Li concluded its four-day visit to Italy at the invitation of Italian government on Tuesday. (Xinhua/Alberto Lingria)

A delegation of the Communist Party of China (CPC) headed by Li Hongzhong, a member of the Political Bureau of the CPC Central Committee, concluded its four-day visit to Italy at the invitation of Italian government on Tuesday.

He also visited the Confucius Classroom at the Marco Foscarini Middle School.

This year marks the 15th anniversary of the establishment of the comprehensive strategic partnership between China and Italy, said Li, noting Italy was the first G7 country to join the Belt and Road Initiative.

The two countries have a very fruitful cooperation in a variety of fields, including the economy, trade, science and technology, aerospace, environmental protection and culture, said the senior official.

Li said that China is willing to work with Italy to continuously strengthen mutual political trust, expand exchanges and cooperation in various fields based on the important consensus reached by the countries' leaders, and push forward the bilateral ties to a new level.

The CPC is willing to further deepen the friendly exchanges with Italy's Parliament and major political parties and learn from each other so as to play a bigger role in promoting the development of bilateral relations, he said.

Speaking highly of the significance of Li's visit, the Italian side said the visit will help maintain the good momentum of bilateral relations.

They also voiced their willingness to maintain high-level exchanges with China, strengthen cooperation and exchanges in various fields, and continuously enhance understanding and mutual trust to promote pragmatic cooperation that would benefit both nations.