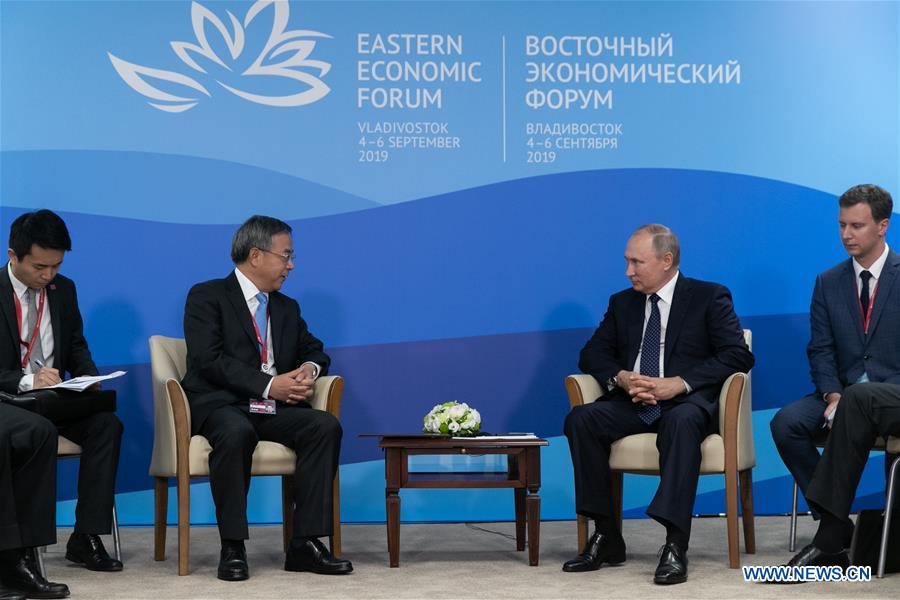 Putin made the remarks here at a meeting with visiting Chinese Vice Premier Hu Chunhua on the sidelines of the fifth Eastern Economic Forum (EEF).

Putin thanked the Chinese high-level delegation for participating in the forum and asked Hu to convey his sincere greetings to Chinese President Xi Jinping.

This year marks the 70th anniversary of diplomatic ties between the two countries, said Putin, adding that strengthening Russia-China cooperation in different areas is of special significance and there is huge potential for such cooperation to expand.

By coordinating with each other, Moscow and Beijing play important roles in international issues, the Russian leader said, adding that with concerted efforts of the two sides, economic and trade ties between the two countries are also growing steadily.

Hu conveyed the Chinese president's cordial greetings and best wishes to Putin, saying that Xi attended the fourth EEF last year and sent him to attend the fifth EEF this year, which shows that China attaches great significance to its relations with Russia.

Recalling that Xi and Putin elevated bilateral relations in Moscow in June to a comprehensive strategic partnership of coordination for a new era, Hu said that China is ready to work with Russia to implement the important consensuses reached by the two presidents and continuously push bilateral ties forward.

China-Russia economic and trade ties have improved over the recent years, and relevant departments of both countries are working to achieve the target of 200 billion U.S. dollars in bilateral trade volume by 2024 set by Xi and Putin, Hu said.