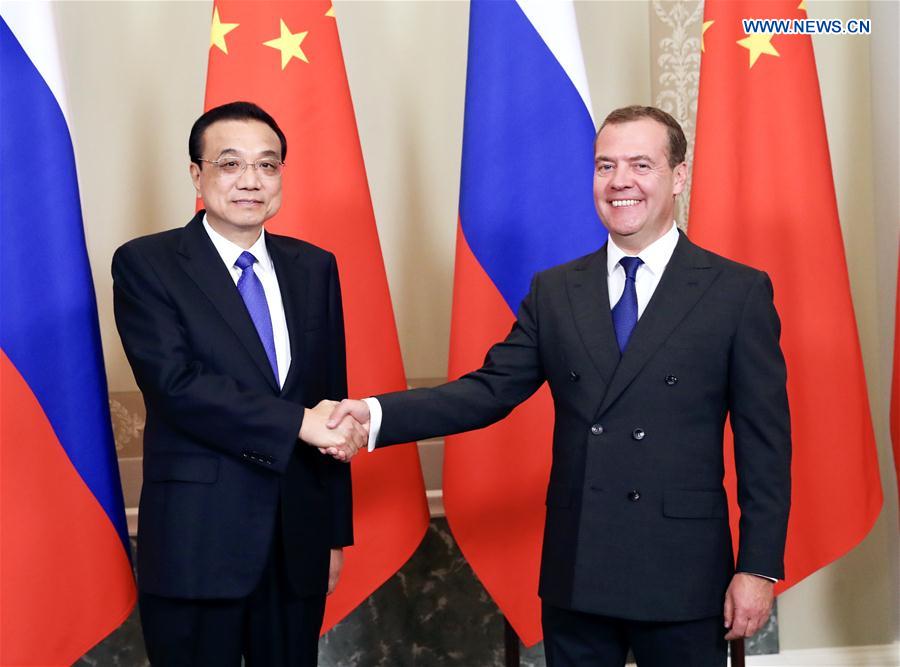 China and Russia Tuesday agreed to further enhance cooperation in trade, energy and other areas, setting a goal to double bilateral trade volume.

Li said China stands ready to better align the Belt and Road Initiative with the Eurasian Economic Union, maintain the growing momentum of China-Russia trade and improve the level of trade and investment facilitation.

He encouraged both sides to strive for the goal to double bilateral trade volume.

Li called on China and Russia to jointly implement the major energy projects, further open up markets to each other and explore the cooperation mode of oil refining and chemical engineering.

He also called for enhanced cooperation in science and innovation, finance, agriculture, sub-national and people-to-people exchanges.

For his part, Medvedev said Russia is willing to further expand trade with China and will work hard to realize the goal of doubling the trade volume.

Besides bilateral cooperation in traditional areas such as energy, Russia will scale up cooperation on hi-tech and promote cooperation in areas including agriculture, industry, aviation and space, nuclear energy to yield more fruitful results, said Medvedev.

Russia attaches great importance to the sub-national cooperation and people-to-people exchanges, he said, adding that the country hopes to conduct more exchanges between young people, universities and local governments.

Li's visit was made on the occasion of the 70th anniversary of China-Russia diplomatic relations. During Chinese President Xi Jinping's state visit to Russia in June this year, China-Russia relationship was elevated to the comprehensive strategic partnership of coordination for a new era.

Against the backdrop of growing uncertain and unstable factors in the international situation, it not only benefits both countries but also contributes to regional and world stability and prosperity that China and Russia enhance strategic coordination, reinforce political mutual trust, deepen pragmatic cooperation and intensify people-to-people and cultural exchanges, he said.

Noting that bilateral ties are now at their best in history, Medvedev said it is Russia's priority of foreign policy to develop ties with China as it accords with Russia's own needs.

He said both countries have been coordinating on the international stage and advocating that multilateral international rules should be followed while unilateral sanctions should be opposed.

The two heads of government also had in-depth exchanges of views on international and regional issues of common concern.

After the meeting, Li and Medvedev signed a joint communique of the 24th regular meeting and witnessed the signing of a series of deals in areas including investment, economy and trade, agriculture, nuclear energy, aviation, science and technology, and digital economy.