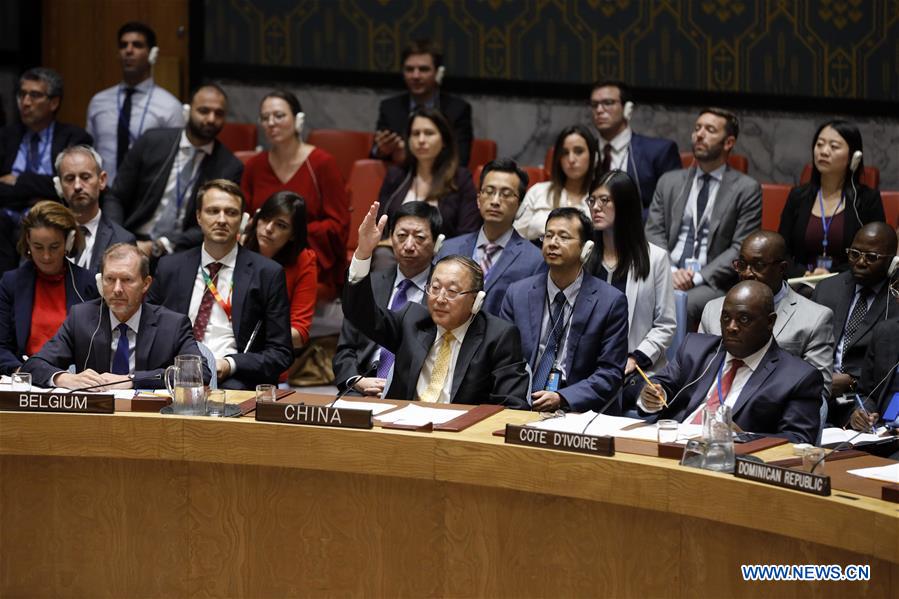 China's Permanent Representative to the United Nations Zhang Jun (C, Front) vetoes a UN Security Council draft resolution on Syria at the UN headquarters in New York, on Sept. 19, 2019. Zhang Jun said Thursday that China has to vote against a Security Council draft resolution on Syria as the text missed the essence of the humanitarian issue and failed to address China's core concerns. (Xinhua/Li Muzi)

China's Permanent Representative to the United Nations Zhang Jun said Thursday that China has to vote against a Security Council draft resolution on Syria as the text missed the essence of the humanitarian issue and failed to address China's core concerns.

The draft prepared by Belgium, Germany and Kuwait won the support of 12 of the 15 members of the Security Council, but was unable to be adopted because of "No" votes from Russia and China, which have veto power.

The Security Council closely follows the humanitarian situation in Syria. Regarding the Idlib issue, starting on Aug. 31, Russia and the Syrian government have implemented a cease-fire, which has been maintained in general. The diplomatic efforts by relevant parties of the international community are ongoing and the situation in Idlib is developing toward a positive direction. Under such a context, pushing a draft resolution that has major controversies to a vote is clearly unconstructive, and this move will not achieve the expected result, Zhang said after the vote.

Terrorist organizations continue to expand their sphere of influence in the northwest region of Syria. This is the source of the humanitarian issue in Idlib. It also poses a grave risk to the safety and security in the region. The council should be united in tackling this grave challenge together, he said.

China has constructively participated in the negotiations of the text and has proposed reasonable revisions. Unfortunately the draft resolution was put to a vote without touching upon the essence of the issue and addressing China's core concerns. For this reason, China voted against it, the Chinese ambassador said.

The international community must fully respect the sovereignty, independence, unity and territorial integrity of Syria; fully listen to the views of the Syrian government; and seek a comprehensive solution to the Syria issue through political means. At the same time, more attention should be paid to the post-war reconstruction of Syria and its economic and social development so as to help Syrian people lead a peaceful, stable and happy life, said the ambassador.

China firmly rejects the groundless accusations made by the representatives of Britain and the United States against China at the meeting, Zhang said. China has the right to make an independent decision on how it votes in accordance with to the rights and wrongs of a situation and the interests of the Syrian people. No country has the right to make willful accusation on this, he said.

"I would like to point out that the current situation of Syria and the sufferings of the Syrian people are exactly the results of the wrongful conducts by some countries. It is these countries that should reflect on their own behavior," Zhang said.