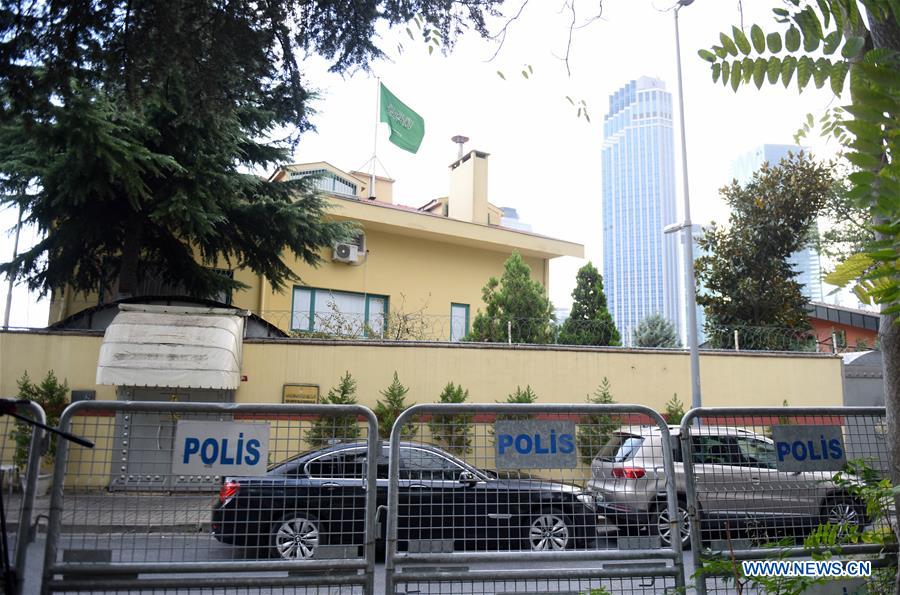 Photo taken on Oct. 10, 2018 shows the Saudi Arabian consulate in Istanbul, Turkey. Turkey has identified eight out of 15 suspects linked to the missing Saudi journalist Jamal Khashoggi, state-run Anadolu Agency reported on Wednesday. A total of 15 Saudis entered the consulate in Istanbul while Khashoggi was inside, Anadolu quoted security sources as saying. (Xinhua/He Canling)

Kalin told reporters that the agreement was reached upon Riyadh's request.

"A joint working team between Turkey and Saudi Arabia will be formed to investigate the case in all its aspects," he said.

Khashoggi, a journalist and columnist for The Washington Post, has been missing since he entered the Saudi consulate in Istanbul on Oct. 2 to get documents for his marriage.

Turkish prosecutors have launched a probe into the whereabouts of the Saudi journalist.

Turkish police said that 15 Saudis, including several officials, arrived in Istanbul on two planes and entered the consulate while Khashoggi was inside.

Eight out of the 15 suspects linked to the missing Saudi journalist have been identified by Turkish police.

Unconfirmed reports said that Khashoggi was likely killed inside the compound, which was dismissed by Saudi authorities as "baseless".

Saudi Arabia on Tuesday invited Turkish experts and officials to visit the consulate after Turkey demanded to search the building.