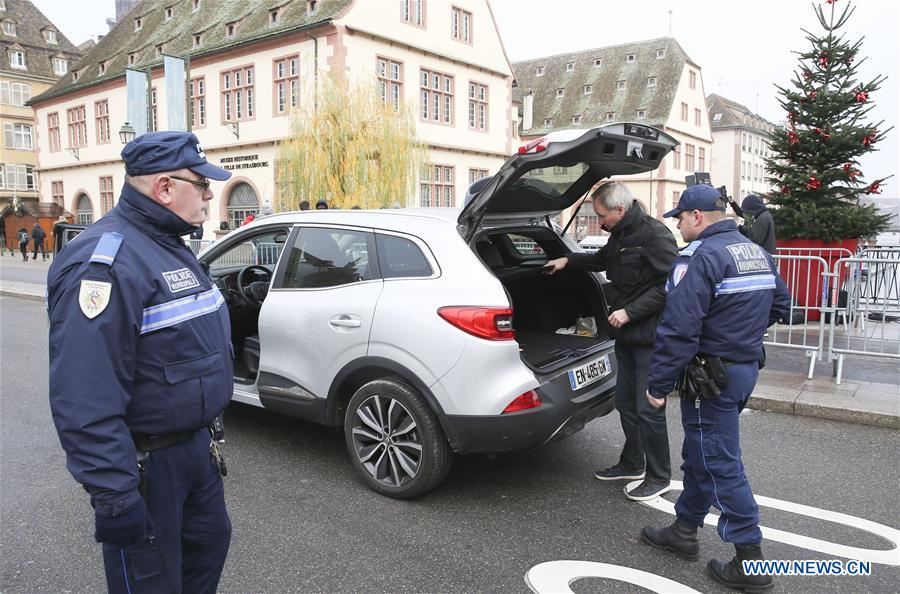 Policemen check a car in the center of Strasbourg, France on Dec. 12, 2018. French police are looking for a gunman after he killed at least four people and wounded 13 others Tuesday evening near a Christmas market in Strasbourg on the German border. (Xinhua/Ye Pingfan)

French police are looking for a gunman after he killed at least four people and wounded 13 others Tuesday evening near a Christmas market in Strasbourg on the German border.

Identified as Cherif Chekatt, 29 years old, the shooter has a prior criminal background and was known to the intelligence services as "at risk for radicalization". He served several prison terms in France and Germany for armed robberies.

The Strasbourg-born man, is believed to have been injured during fighting with security forces as he escaped, according to local reports.

"350 police and gendarmes are currently on the ground to arrest the suspect, supported by two helicopters and officers from elite units and Sentinelle forces," Interior Minister Christophe Castaner said in a late-night press briefing.

"The government has raised its security threat to the highest level and is bolstering border controls. We will also reinforce security at all Christmas markets to prevent copycat attacks," he said.

At around 7:50 pm (1850 GMT) Tuesday, a man opened fire several times in the center of Strasbourg, near Place Kleber and the Grand' Rue, one of the city's main shopping streets where a Christmas market is held every year, drawing about 2 million visitors.

The death toll has risen to four and 13 others were wounded, among them eight remained in critical situation, local authorities said.

French counter terrorism prosecutors have opened an investigation into the incident, but has yet to establish a terrorist-link.

"The assailant was not known for crimes related to terrorism," and he was allegedly radicalized during his stay in prison, and was put under surveillance, Deputy Interior Minister Laurent Nunez told France inter radio, adding that it is still unsure if the shooter has left (French) territory.