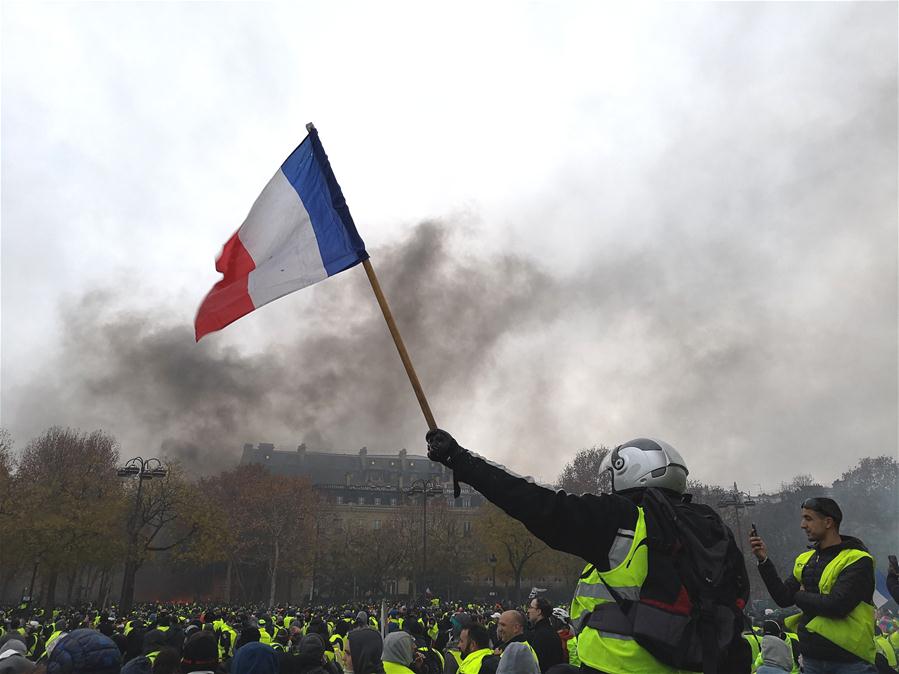 For the fifth consecutive Saturday since Nov. 17, 49-year-old Lelorrain Denis traveled half an hour from Paris' suburb to downtown. Wearing a yellow vest, he came here to demonstrate for his future.

A gardener for over 20 years, he managed to make ends meet every month. "My life would deteriorate after retirement, and I am losing hope. The government indulges the rich people and neglects us," he told Xinhua Saturday under France's famous landmark and a symbol of national pride, the Arc de Triomphe.

At the other side of the Arc, a Madagascan in his 40s and a cafe owner, who identified himself as Moukaire, said the weekly yellow vest demonstrations have scared away customers and cost him 12,000 euros (13,560 U.S. dollars) in lost revenue.

Standing behind the counter against rows of empty chairs, he said such a violent protest is unbelievable even in his motherland. "We are all gonna lose at the end," he said.

To protect the Arc from being damaged again, the police have set up four checkpoints along the 500-meter-long avenue. Denis and his companions therefore had to spend more time traveling to the Arc than usual. There would also be a long, bumpy way for the French to regain their pride.

Taken from the high-visibility jackets used by drivers, the name "yellow vest" was created as part of a social media campaign, in which several groups called for blockades and go-slows across the country to oppose a higher fuel tax and a rise in the price of diesel, the most commonly used car fuel in France.

Starting in mid-November, the movement has gradually turned into a nationwide rally, blaming the government for favoring the rich and doing little for the needy.

To quell the public outrage, Macron on Monday released an economic and social emergency plan, which involved a tax cut and an increase in the minimum wage.

His announced measures have worked to some extent, as the number of protesters nosedived Saturday, yet 66,000 people were still demonstrating in France on the day, and for them, the president's promise was far from enough, and late, too.

"Our president has made a speech that does not satisfy us, a recorded speech written by his advisers," said a protester who only gave his first name, Sylvain. "I felt the falsity in his speech. So we will not let it go."

Considering Macron's concessions as inadequate, a protester named Victor told Xinhua that a rise in the minimum wage is not paid by enterprises or wealthy bankers, but the social welfare system. "Basically it equals to stealing from one pocket and putting it in another. This won't solve anything."

So far such a demonstration has spread to other European countries.

In Brussels, around 450 people have been temporarily detained on Dec. 8 after police forces clashed with around 1,000 yellow vest protesters. In the Netherlands, hundreds of protesters in major cities took to the streets on Dec. 8, while demonstrators in Britain blocked the main bridges in London.

Yellow vests took to the streets with different requests.

A protestor who identified himself as Denis joined the movement because he wanted lower taxes and higher income. Another protestor, Nina, has a monthly net income of 3,000 euros (3,390 dollars) but came here anyway to show her solidarity with the low-income community.

Sylvain told a different story. "I don't really have an objective for the result, because we are not in a competition. Only the future can tell us that." Nevertheless, he agreed that his motherland is ailing.

"I can't stand to see the misery in my country and the government does nothing to get people out of this misery, and it is always the big companies, banks who grab everything," said Sylvain.

For Eddy Fougier, a political analyst and associate research fellow at the Paris-based French Institute for International and Strategic Affairs, the root cause for the movement goes far beyond the fuel tax.

It signifies a rejection of the political choices advocated by the French government in the past 20 to 30 years, in particular their failure to battle unemployment, said the expert.

"More broadly, there is also a rejection of elites, be it economic, political or even intellectual. For protesters, these elites do not realize (difficulties in) their everyday life," added Fougier.

"As we see the middle class in France, like in some certain number of European countries, is diminishing. The problem is that people feel that their situation is growing worse and hope for the future is going away. That brings this kind of desperate movement," he told Xinhua.

Under the Arc de Triomphe, a young Mexican woman called Jessica Arochi and her family were busy taking pictures, despite the armored vehicles around them.

Arochi said she had heard about the yellow vest movement on TV but did not know a lot about it. "I love France very much and this is my fifth time here. But I am also afraid of the violence," said Arochi. "They have the right to demonstrate but should in a peaceful way ... Honestly speaking I have no idea how to protect myself and my family."

A waiter who only gave his first name Nicholas in Moukaire's cafe near the Arc told Xinhua that violence is definitely not good.

"It's harmful to our business ... it will scare tourists away," he said. "It's bad for France."

Data from the French authorities showed significant losses caused by the protest. Since the movement began, domestic retailers had lost about 1 billion euros (1.13 billion dollars). The hotel sector witnessed a decline in bookings by 15 to 20 percent. Due to the blockage of transport and shopping centers, the food sector could suffer a loss tantamount to 13 billion euros (14.69 billion dollars).

What's worse, the ongoing movement has dealt a heavy blow to Macron's ambitious reform, and might force him to slow down or even cancel some urgent plans in the future.

The promised minimum wage rise would put a heavier burden on France's budget. Should the government deficit once cross the European Union's red line, Macron's prestige as a European leader would be undermined.

"If the violence continues to rise and the movement continues in January, despite the Christmas celebrations, the government will have to make a change of people or of politics," said Fougier.