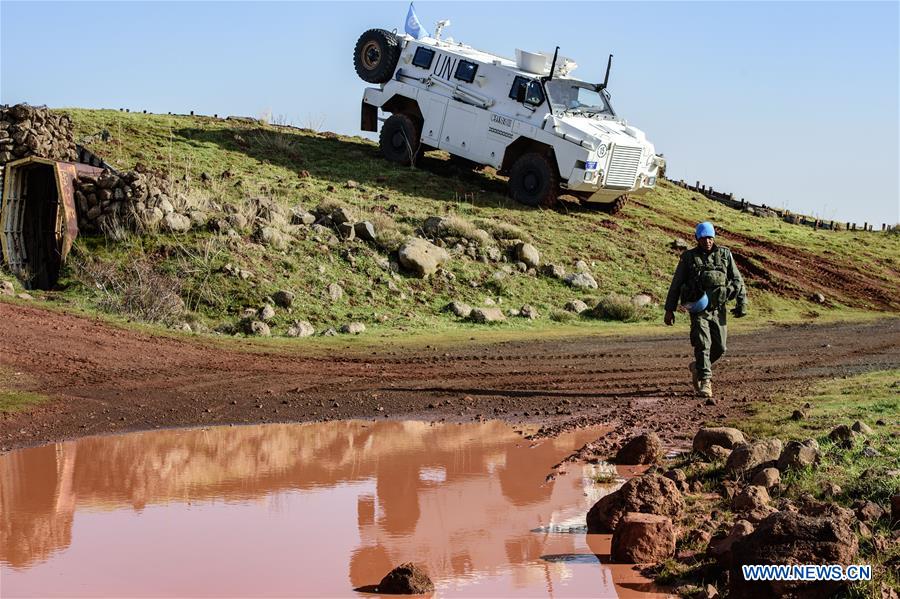 A UN vehicle is seen in the Israeli occupied Golan Heights, on Jan. 21, 2019. Israel's military confirmed Monday that it had struck Iranian targets in Syria, saying the move was a retaliation of a rocket fired from Syria on Sunday. (Xinhua/Gil Elyahu-JINI)

Israel's military confirmed Monday that it had struck Iranian targets in Syria, saying the move was a retaliation of a rocket fired from Syria on Sunday.

A military spokesperson said in a statement that fighter jets struck Iranian Quds targets, including munition storage sites, a site located in Damascus International Airport, an intelligence site and a military training camp.

"During the strike, dozens of Syrian surface-to-air missiles were launched despite clear warnings to avoid such fire," the spokesperson said, adding that "in response, several of the Syrian armed forces' aerial defense batteries were targeted."

The spokesperson said the attack was a response to a surface-to-surface rocket allegedly fired by the Quds forces towards the northern Golan Heights in Israel which was intercepted by Israel's Iron Dome anti-rocket system.

The rocket proved Iran "endangers" Israel and "regional stability," according to the army.

The spokesperson said that the military holds Syrian President Bashar al-Assad's regime responsible for the rocket.

"The IDF (Israel Defense Forces) is prepared for a wide variety of scenarios and will continue operating as needed in order to defend Israeli civilians."

After the Israeli attack, Mount Hermon, a popular ski site adjacent to Syria in the Israeli-annexed Golan Heights, was shut down for visitors on Monday for precautionary reasons.

SANA, a state-run Syrian Arab News Agency, reported that the "Israeli enemy dealt a heavy strike" with dozens of guided missiles. Our air defenses immediately intercepted the hostile missiles and destroyed most of them before reaching their goals."

According to Hebrew reports in Israel, the Israeli missiles caused casualties and massive damage.

The Israeli army rarely publicly admits its involvement in attacks in Syria.

Israel says it is not part of the eight-year war in Syria but its military has carried out hundreds of air attacks over the past years against Iranian targets, which Israel accuses of attempting to entrench itself in Syria, in addition to Syrian army positions.

Israel has mostly kept silent on its actions against Iranian targets in Syria, fearing such comments might trigger an escalation.

That policy started to change by Israeli Prime Minister Benjamin Netanyahu, who confirmed earlier in January, 2019 that the air force had struck on Iranian sites in Syria hours after the attack.