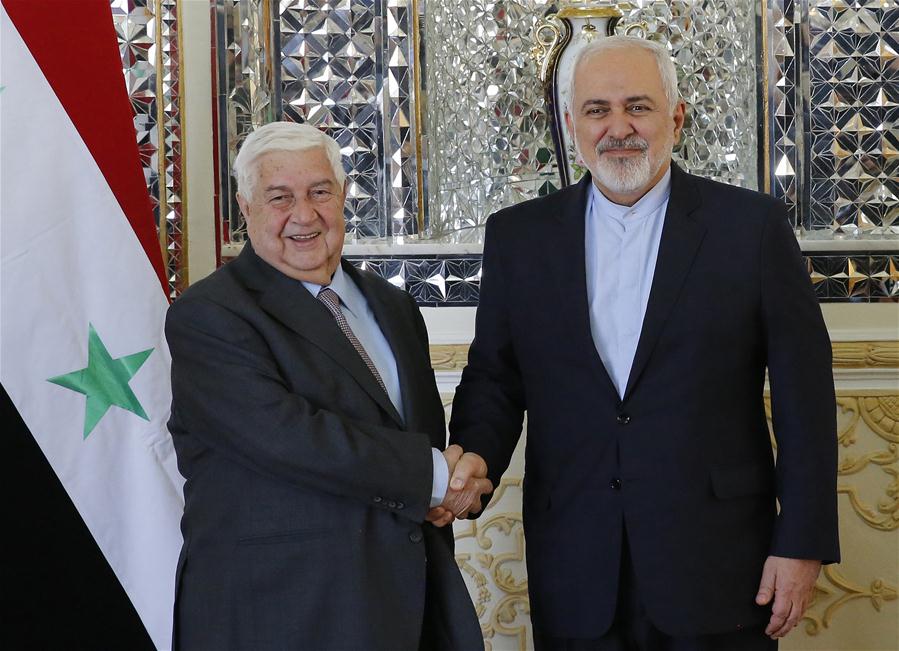 Iranian Foreign Minister Mohammad Javad Zarif said on Tuesday that Israel does not favor the establishment of peace and security in Syria and in the region, official IRNA news agency reported.

Regional countries should boost convergence and cooperation to counter any plots against them, Zarif said in a meeting with his visiting Syrian counterpart Walid Muallem.

Zarif also said the private sector of his country is ready to take part in the reconstruction of Syria and economic interaction with Damascus after the eight-year war in the country.

For his part, Muallem commended Iran for supporting Syria against terrorism, saying Syria's recent victories against terrorists also belong to Iran and other allies of Damascus.

Muallem also briefed Zarif on the latest developments in Syria and the ongoing process for the political settlement of conflicts in his country.

Earlier in the day, a senior Iranian security official said the joint fight with Syria against terrorism has contributed to regional and international security, Press TV reported.

Tehran and Damascus will continue their cooperation until the eradication of the scourge in the Arab country, Secretary of Iran's Supreme National Security Council Ali Shamkhani said in another meeting with the Syrian foreign minister.

"Cooperation between Iran and Syria in the fight against terrorism has resulted in undeniable achievements for the region and international security, and this trend will continue until the end of the security crisis in this (Arab) country," Shamkhani was quoted as saying.

He further said some Western countries sabotage the political process to end conflicts in Syria and their "illogical positions and pretexts" are merely aimed at prolonging the crisis gripping the country.

"Common enemies of the Muslim world, particularly the United States and the Zionist regime (of Israel), are trying to destroy great interests of Muslim countries such as security and economic progress by creating and intensifying conflicts and discord," Shamkhani said.

He also censured Israel's "unacceptable" continued aggression against Syrian soil and violations of its territorial integrity.

If these actions continue, Israel will receive a "firm and appropriate response in a way to teach a lesson to the criminal and lying rulers of Israel," he was quoted as saying.

Shamkhani also stressed the importance of improving relations between Tehran and Damascus, particularly in trade and economic sectors.

Muallem, for his part, hailed Iran's "extensive" support for Syria.

Iranian Parliament Speaker Ali Larijani also held a meeting with Muallem on Tuesday, during which he said the Syrian people's resistance has neutralized the enemies' adventurism.

Larijani stressed the boost of cooperation between the two nations, saying Tehran and Damascus should boost their trade ties in 2019.

Muallem arrived in the capital Tehran on Tuesday to discuss Tehran-Damascus ties and the latest political developments in Syria.

His visit to Tehran comes ahead of an upcoming summit of Iran, Russia and Turkey in Russia's Sochi as part of the Astana peace process over Syria.