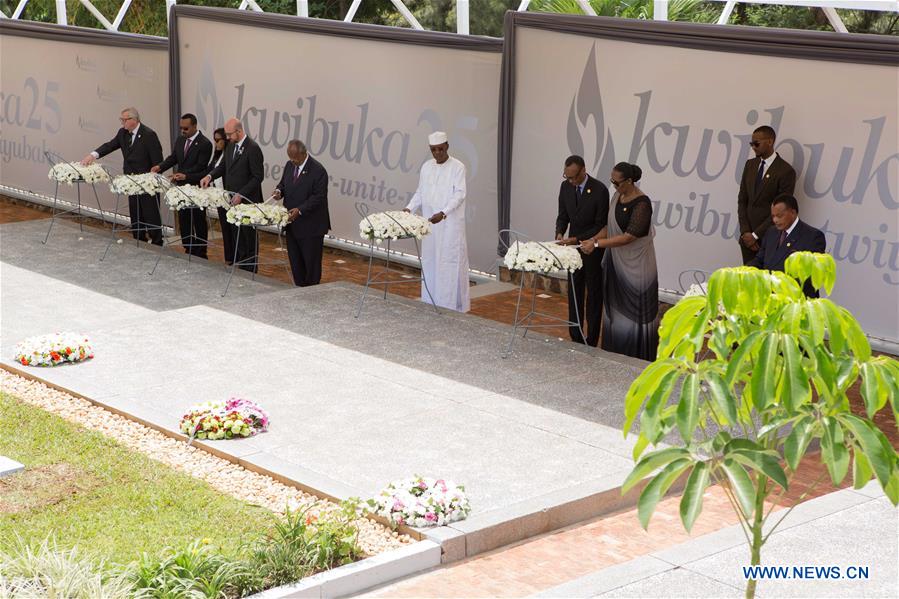 Rwandans on Sunday started the commemoration to mark the 25th anniversary of the 1994 genocide that left over 1 million people dead, mainly ethnic Tutsis, with President Pual Kagame calling for continued efforts to transform the country.

"Rwanda's young people have everything needed to transform our country," Kagame said. "They have the responsibility to take charge more and more, and participate fully in securing the Rwanda we want and deserve."

Three quarters of Rwandans are under 30, and almost 60 percent of Rwandan people were born after the genocide, Kagame said.

Rwandans are the last people in the world who should succumb to complacency, he said, adding that the suffering the Rwandan people have endured should be enough to keep their fighting spirit alive.

"The fighting spirit is alive in us. What happened here will never happen again," Kagame said.

Dignitaries present at the ceremony also recognized Rwanda's recovery after the genocide.

Rwanda is an example of how a deeply wounded society can rise again, thanks to the courage of its people, said president of the European Commission, Jean-Claude Juncker.

The genocide commemoration event is an opportunity to celebrate the remarkable resilience of the people of Rwanda as well as the extraordinary leadership, said Belgian Prime Minister Charles Michel.

The excellent leadership of the Rwandan government, coupled with the resilience of Rwandans, is what has made Rwanda move forward, Ethiopian Prime Minister Abiy Ahmed said.

Rwanda's commitment to reconciliation is a testament to honoring victims and it's a lesson for the world to have hope in reconciliation, Ahmed said.

"I applaud the resilience of genocide survivors and all Rwandans. Rwanda has emerged from the darkest period to become one of the fastest growing economies in Africa," said Djiboutian President Ismail Omar Guelleh.

Moussa Faki Mahamat, chairperson of the African Union Commission, told the ceremony that he is planning to set up a platform in charge of fighting against the most abominable genocidal ideologies and ethnic derivatives in Africa.

Performances for remembrance were staged during the ceremony.

Shortly before the ceremony, Faki, Juncker and other dignitaries laid wreaths at the Kigali Genocide Memorial, the final resting place for more than 250,000 victims of the genocide.

Other activities on the first day of the commemoration include a Walk to Remember event and a night vigil at the Amahoro National Stadium.

Heads of Rwandan national commissions for anti-genocide and reconciliation both spoke highly of Rwanda's reconciliation and unity after the genocide in interviews with Xinhua days ahead of the commemoration.

Rwandans have reconciled whereby genocide perpetrators and survivors are able work together to develop their respective communities through community work, or Umuganda, and other national development initiatives, said Jean-Damascene Bizimana, executive secretary of the National Commission for the Fight against Genocide.

Unity and reconciliation among Rwandans have reached more than 95 percent and the country is continuing to ensure that Rwanda will be a completely unified country in the next few years, according to Fidele Ndayisaba, executive secretary of National Unity and Reconciliation Commission.

However, genocide denial, among others, pose a challenge to the reconciliation, they both said.

"Some people have continued to trivialize the 1994 genocide against the Tutsi through various platforms such as online publications and social media channels," Ndayisaba said.

Rwanda's post-genocide generation should sustain and carry forward the legacy of resilience, integrity and unity needed to shape a bright future for the country, President of the umbrella of Genocide survivor organizations IBUKA Jean Pierre Dusingizemungu told Xinhua on Saturday.

"The spirit of Rwandans remains strong. We are now united and committed to building a prosperous future for generations to come," said Jeannette Uwamahoro, a genocide survivor.