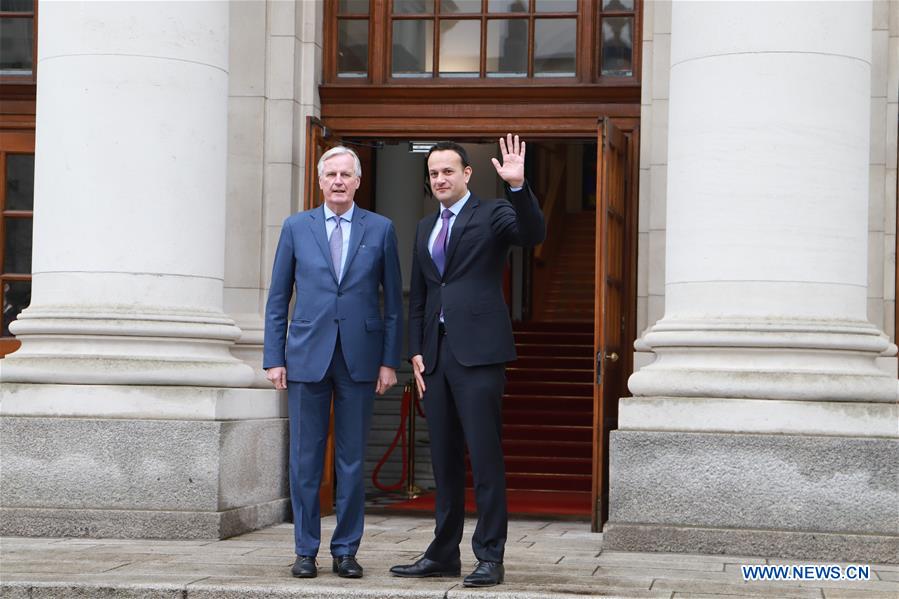 Barnier made his remark at a press briefing following his meeting with the Irish Prime Minister Leo Varadkar.

"As you all know, there are intensive cross-party discussions ongoing in London....We all hope these talks will produce a positive outcome," said Barnier.

He said that "the Political Declaration provides for a range of outcomes including a customs union. We are ready to make this clearer if it helps and its work can be done extremely quickly".

The Political Declaration is a legally none-binding document on the future relationship between the EU and Britain after Britain exits from the EU.

Barnier said that the most important aim of his trip to Ireland, the fifth of its kind for him as a chief Brexit negotiator of the EU, is to take stock of the latest developments in London and to discuss the summit meeting of the European Council convened by its president Donald Tusk in Brussels on Wednesday.

The upcoming EU leaders' meeting will decide whether the latest request by the British Prime Minister Theresa May to seek a further extension to the Brexit date to June 30 should be granted or not.

Barnier said that during his meetings with the Irish PM and other senior Irish officials they also discussed what would happen in Ireland in a possible no-deal scenario.

He said "our goal is to protect the Good Friday Agreement, peace on this island and integrity of the single market".

He admitted that to achieve such a goal is not an easy task, but he said that "We are confident that we will find operational solutions."

"One thing is certain whatever happens the EU will stand fully behind Ireland. You will have our full support," he said, adding that "the backstop is currently the only solution we've found to maintain the status quo on the island of Ireland."

The backstop refers to a temporary arrangement to ensure that no hard border will occur between Ireland and Britain's Northern Ireland after Brexit until and unless a better alterative is found.

"If the UK will have to leave the EU without a deal, let me (be) very clear, we will not discuss anything with the UK until there is an agreement for Ireland and Northern Ireland as well as for citizens' rights and the financial settlement," he warned, adding that the EU 27 member states will remain fully united as they have been from the very beginning of the Brexit negotiations.

Irish Prime Minister Varadkar, in his speech at the press briefing, expressed his thanks for the solidarity that Barnier and the EU have showed for Ireland over the Brexit issue.

He reiterated his government's stand that Ireland is open to extending the Brexit deadline to allow talks in the UK to reach their conclusions so long as Theresa May's government has a clear plan that is focused on a future relationship with the EU rather than trying to reopen the Withdrawal Agreement negotiations.

"What we want to avoid is an extension that just allows for more indecision and more uncertainty," he told the local media prior to his Monday's meeting with Barnier.