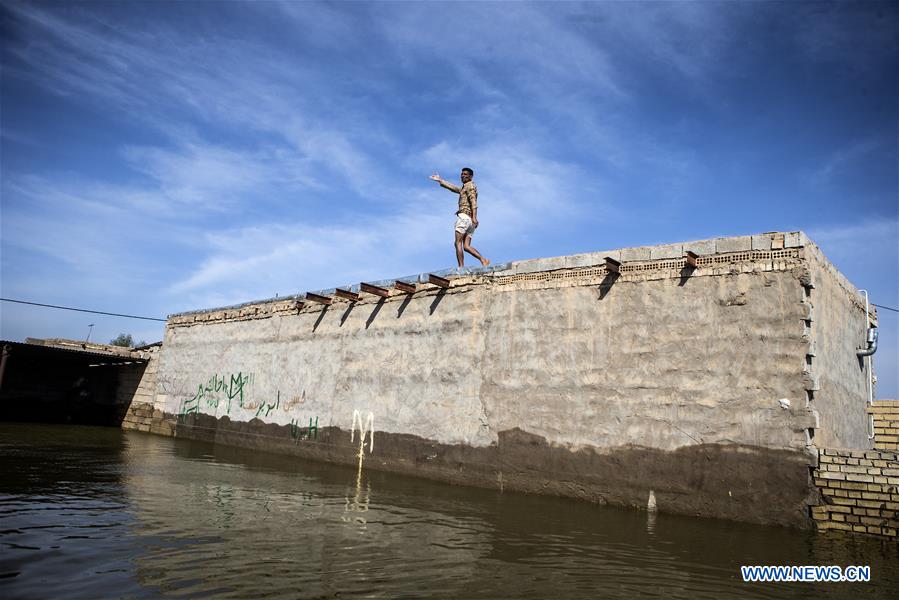 A man stands on the roof of a house surrounded by flood water in a village in Khuzestan province, Iran, on April 13, 2019. The recent flooding in most parts of Iran killed at least 76 people, Press TV reported on Sunday. (Xinhua/Ahmad Halabisaz)

The recent floodings in most parts of Iran killed at least 76 people, Press TV reported on Sunday.

The heavy downpours in north, west and southwest of the country also caused hundreds injured.

Iranian officials are warning that even though floodwaters have been receding in most parts of the country, several provinces remain under the flood alerts due to renewed heavy precipitation.

Ahad Vazifeh, an official with Iran's Meteorological Organization, said that there is a possibility that flash floods could still affect the southern provinces of Fars and Hormozgan, Sistan and Baluchestan in the southeast as well as South Khorasan and Khorasan Razavi provinces in the northeast of the country which are in a state of emergency.

Rainfall is also expected to intensify in the southwestern Province of Khuzestan, he was quoted as saying.

Massive downpours swept 25 out of 31 lranian provinces since March 19, with raging currents of water battering houses, washing away cars, destroying the infrastructures and agricultural fields.