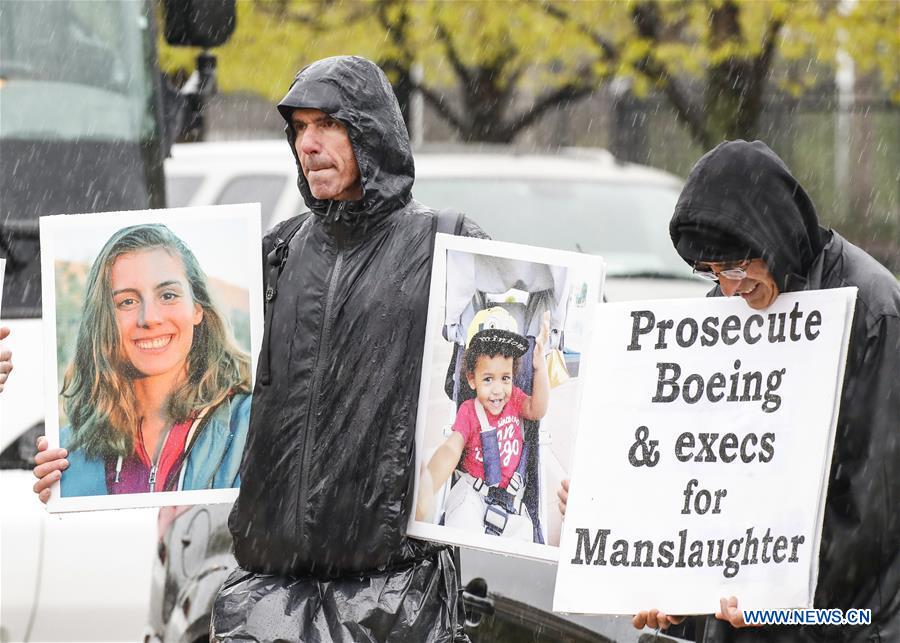 Tarek Milleron (L), uncle of 24-year-old Samya Stumo who was killed on the Ethiopian Airlines Flight 302, protests outside the James Simpson Theatre in the Field Museum of Natural History, where Boeing holds its annual shareholders meeting, in Chicago, the United States, on April 29, 2019. (Xinhua/Joel Lerner)

Two families filed lawsuits against Boeing in Chicago on Monday over the 737 MAX crashes that killed 346 people, the same day when Boeing held its shareholders meeting at the James Simpson Theatre in the Field Museum of Natural History in downtown Chicago.

"I lost three generations of my family, my parents, my sister, my nieces. If a person lost just one life, their whole life is shattered. But right now with me, I'm more like, I don't know. I'm completely lost right now," said Vaidya at a news conference held at the Clifford Law Offices room in downtown Chicago on Monday.

"I stay up all night crying, thinking of the horror that they must have endured as pilots struggled to keep the plane flying for six minutes," he said. "The terror that my wife must have experienced with little Rubi on her lap ... Our two children beside her, crying for their daddy, my mom in law, feeling helplessness, those six minutes will forever be embedded in my mind. I was not there to help them. I couldn't save them."

Njoroge choked several times while reading his statement, Vaidya stood up and walked over to pat him on the back at one point.

Kevin Durkin, a partner at Clifford Law Offices, promised that if Boeing denies its negligence in the crash, his firm would "seek every single email, text message that was between them and the FAA".

Alleged problems with the Maneuvering Characteristics Augmentation System (MCAS) have been widely reported to be a likely contributor to the crashes.

In a written statement published earlier, Boeing President and CEO Dennis Muilenburg said, "We at Boeing are sorry for the lives lost in the recent 737 MAX accidents ... All of us feel the immense gravity of these events across our company and recognize the devastation of the families and friends of the loved ones who perished."

"We've had teams of our top engineers and technical experts working tirelessly in collaboration with the Federal Aviation Administration and our customers to finalize and implement a software update that will ensure accidents like that of Lion Air Flight 610 and Ethiopian Airlines Flight 302 never happen again," the statement read.

Boeing said it remains confident in the aircraft and has promised software changes to the MCAS function. "It will be among the safest airplanes ever to fly," read the statement from Muilenburg.

Muilenburg disputed the saying that the 737 MAX was rushed to market. "It was a six-year development; 1,600 test-flights of the airplane; 3,700 flight hours of development on the Max, so it was thorough and it was disciplined," he told investors during a Q&A session at Boeing's annual shareholder meeting in Chicago on Monday.

Outside the Field Museum there were six protestors carrying the photographs of crash victims.

Laurie Engel carried photos of Bennet and Melvin Riffel, two brothers from California of the United States who lost their lives during the Ethiopian Airlines Flight 302 crash. She told Xinhua that she just wanted to raise the awareness of Boeing and "not to put profit before people's safety".

Tarek Milleron, uncle of 24-year-old Samya Stumo who was killed on the Ethiopian Airlines Flight 302, was among the protestors.

The crashes of Lion Air Flight 610 in October 2018 and Ethiopian Airlines Flight 302 in March 2019 made headlines around the world, and finally led to the grounding of the Boeing 737 MAX aircraft by European, Asian and American authorities. Boeing's stock lost 20 dollars per share of value since March 11, the day after the Ethiopian Airlines crash, equivalent to a 5 percent drop in the stock price.

The families' lawsuit was filed in the federal district court in Chicago.