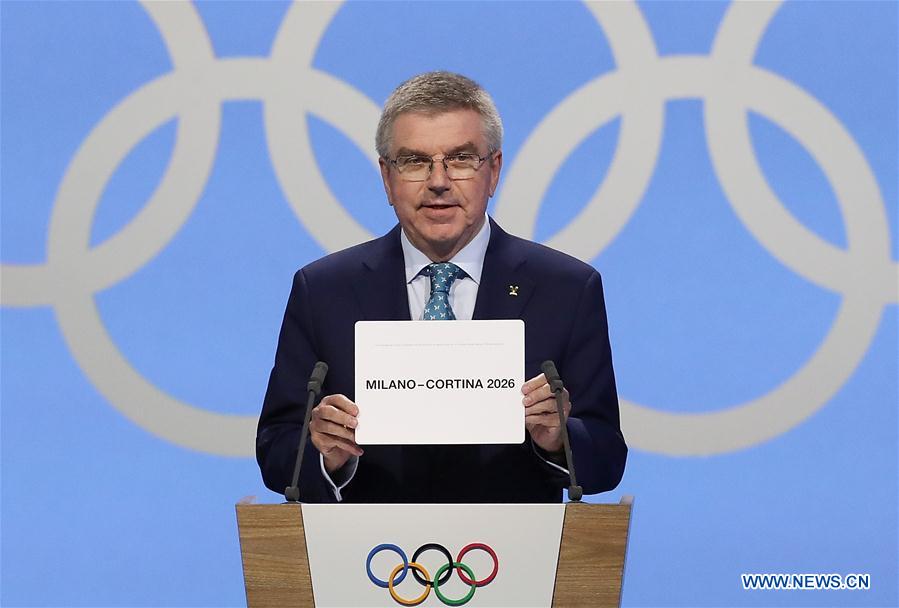 Italian cities Milan/Cortina were elected host of the 2026 Winter Olympic Games at the 134th session of the International Olympic Committee (IOC) here on Monday.

IOC President Thomas Bach announced Milan/Cortina as the winner after they beat Sweden's Stockhom/Are 47-34 in a vote by 83 IOC members.

Giovanni Malago, President of the Italian National Olympic Committee, was emotional after the victory.

"We have so many things to say but I am very really emothonal," he said at a press conference. "This is a very important result, not only for me, but for the whole country.

"I am very proud of this fantastic team," he said. "We created this all together. It was very difficult at the beginning but all the people have faith from the beginning."

Bach told reporters, "I would like to congratulate Milan/Cortina for this victory, which for the IOC is a great day.

"We have the 2026 Winter Olympic Games in a traditional winter sport country with experience and passionate fans and athletes.

"With this enthusiasm and support of the Italians, the foundations are laid for fantastic preparations," the IOC chief said.

It will be the third time for Italy to host the Winter Olympic Games. Cortina was the first Italian city to host the Games in 1956 and Turin staged the event in 2006.

"It is very important that Milan has very strong support from the Italian government," he told Xinhua. "Although both candidates are from traditional winter sports nations."

Italian Prime Minister Giuseppe Conte, who joined the Italian bidding delegation in the presentation, promised full support from his government to the northern Italian cities.

"We will work hard and commit ourselves to ensure the event will be remembered in sport history," he said before the vote. "This is the dream of an entire country, and not only the Government but also the regions.

"The cities are fully committed to supporting this project."

Milan Mayor Giuseppe Sala told the IOC memebers, "You know this is the perfect place for the Winter Olympics - Milan, Cortina, and the Alps."

"We have prepared the Games to be friendly to the planet," he added.